Meet the President’s Latest Nominee to the DC Circuit 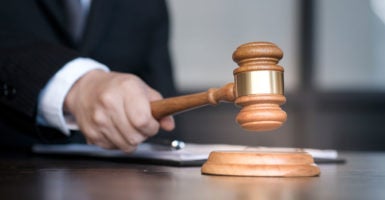 Judge Justin Walker’s age (38) matters less than his experience, and his significant scholarship on administrative law and separation of powers will benefit the D.C. Circuit if the Senate confirms him. (Photo: EyeEm/Getty Images)

The Senate Judiciary Committee will hold a confirmation hearing Wednesday for Justin Walker, President Donald Trump’s most recent nominee to the U.S. Court of Appeals for the D.C. Circuit.

A considerable portion of the D.C. Circuit’s cases involve federal agencies, making it the most important appellate court in the country when it comes to restraining overreaching federal bureaucrats.

Trump has appointed two other judges, Greg Katsas and Neomi Rao, to the 11-member D.C. Circuit. Rao previously served as Trump’s regulatory czar from 2017-2019 and as a law professor at George Mason University. Katsas was the president’s deputy White House counsel and an appellate lawyer in Washington.

Judge Thomas Griffith, appointed to the court by President George W. Bush in 2005, announced in March that he would retire this fall.

So who is Trump’s newest appointee, Justin Walker, chosen to fill the vacancy?

Walker next served as a law clerk to Kavanaugh on the D.C. Circuit and then to Justice Anthony Kennedy on the Supreme Court. He also worked in the appellate practice at the law firm of Gibson, Dunn & Crutcher and later returned to the Bluegrass State, where he had a solo law practice.

In 2015, Walker joined the faculty at the University of Louisville’s Brandeis School of Law, where his scholarship focused on administrative law, national security law, constitutional law, and criminal procedure.

He developed the law school’s Ordered Liberty Fellowship, an advanced program focused on federalism, separation of powers, originalism, natural rights, and the common good. He has served as executive director of Louisville-based Global Game Changers, a nonprofit educational empowerment program for underserved kids.

Walker was an ardent supporter of his former boss, Kavanaugh, during the confirmation process for the Supreme Court, appearing on numerous radio and TV programs. He spoke at a Heritage Foundation event on Kavanaugh’s judicial record and appeared on our podcast “SCOTUS 101.”

Last year, Trump nominated Walker to the U.S. District Court for the Western District of Kentucky. During the confirmation process, the American Bar Association (which has come under scrutiny for bias against Republican nominees) chose to rate Walker as “not qualified” because he had less than 12 years of legal experience.

In its letter, the association explained that there was no question about Walker’s temperament or integrity, and that he “has great potential to serve as a federal judge.” (Changing course, the American Bar Association rated Walker “well qualified” in his nomination to the D.C. Circuit, explaining that he “possesses a keen intellect” and has “significant appellate experience.”)

The Senate confirmed Walker last fall by a vote of 50-41.

At age 38, Walker is on the younger end of Trump’s judicial nominees. But there have been plenty of young nominees to the appeals courts in the past.

For example, President Ronald Reagan appointed some judges in their 30s, including Edith Jones to the 5th Circuit, Frank Easterbrook to the 7th Circuit, and Ken Starr to the D.C. Circuit.

Walker’s age matters less than his experience, and his significant scholarship on administrative law and separation of powers will benefit the D.C. Circuit if the Senate confirms him.

During his hearing, senators likely will ask about Walker’s headline-making temporary restraining order to stop the city of Louisville, Kentucky, from interfering with drive-in church services on Easter Sunday and his close relationship with Senate Majority Leader Mitch McConnell (they met while Walker was in high school).

Senators also may question his support for the Federalist Society, since he signed onto a letter with dozens of other judges expressing concerns about the Judicial Conference’s draft ethics opinion that would prevent judges from being Federalist Society members.

If confirmed, Walker will become the 52nd appeals court judge successfully appointed by Trump and the third on the powerful D.C. Circuit.