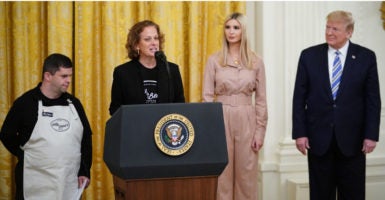 Michael Heup not only got his job back at Bitty & Beau’s Coffee, which was temporarily closed because of the COVID-19 crisis, but he also had the chance to talk about it at the White House on Tuesday.

“I love my job, and I am excited about going back to work,” Heup, a disabled employee, said at the East Room event. “At Bitty & Beau’s, we like to use the phrase called ‘not broken.’ That means me and all my amazing co-workers are not broken, and we have lots to offer. I know the great country of the United States isn’t broken either.”

The Wilmington, North Carolina-based Bitty & Beau’s Coffee had to temporarily close and lay off 120 employees at the company, most with intellectual and developmental disabilities. But it was able to rehire all the employees after getting a federal loan through the Paycheck Protection Program.

The White House had representatives from eight companies at the event sharing their stories of staying afloat after governments’ COVID-19 mitigation efforts forced much of the economy to close.

Under the program, if businesses with fewer than 500 employees do not lay off employees, the principal on the loan is forgivable. Employers still have to pay the interest.

Bitty & Beau’s Coffee has locations in North Carolina, South Carolina, Georgia, and Maryland. For most of the employees, it’s their first paying job. The employees are now “working from home, writing handwritten notes that we include with each online order we ship,” said Amy Wright, CEO of Bitty & Beau’s, also speaking at the event.

The Paycheck Protection Program has disbursed $350 billion to small businesses across the United States, and more than 1.6 million forgivable loans have been approved by the Small Business Administration. Trump said the SBA has issued more loans in the past 14 days than it has in the past 14 years.

However, the program has come under scrutiny for doling out loans to large employers, such as Harvard University and Shake Shack. Several of the big businesses returned the loans after the rash of bad publicity.

“The press has commented on a lot of big companies that inappropriately took the money,” Treasury Secretary Steven Mnuchin said at the event. “We’ve been very clear. We’ve announced today that any loan over $2 million will have a full review for forgiveness before they are repaid because this is the story of small business here.”

When taking questions from reporters, Trump was asked about Democrats in Congress calling for guaranteed incomes that could go on for months.

“I like payroll tax cuts. I’ve liked that from the beginning. That was a thing that I would really love to see happen. Most economists agree with me,” Trump said.

The president expressed skepticism of bailing out states, but he said aid could come with the precondition of changing sanctuary policies, in which local jurisdictions refuse to cooperate with federal immigration authorities.

“We are not looking to recover 25 years of bad management and to give them the money they lost. That’s unfair to other states. Now, if it’s COVID-related, I guess we could talk about it,” Trump said, adding:

But we’d want certain things also, including sanctuary city adjustments, because we have so many people in sanctuary cities, which I don’t even think are popular by radical left folks.

What’s happening is, people are being protected that shouldn’t be protected, and a lot of bad things are happening with sanctuary cities.