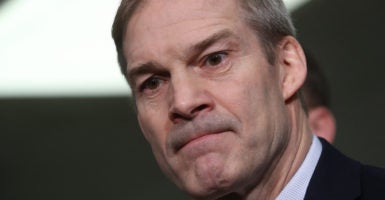 "We should not turn our back on the citizens and lawful immigrants of this great country to favor those that broke the law and came here illegally or overstayed their visas,” Rep. Jim Jordan, R-Ohio, says. Pictured: Jordan speaks with reporters Jan. 23, 2020, in Washington, D.C. (Photo: Mark Wilson/Getty Images)

Republican members of the House Oversight Committee accused their Democratic colleagues of exploiting the coronavirus pandemic to push their own “extreme” immigration agenda.

House Oversight Committee ranking member Jim Jordan said congressional Democrats were attempting to use the COVID-19 outbreak “to advocate for their extreme changes in immigration policy,” and commended the White House for enforcing the rule of law while working to stop the spread of the disease.

“This concept ought to be simple—we should not turn our back on the citizens and lawful immigrants of this great country to favor those that broke the law and came here illegally or overstayed their visas,” Jordan, R-Ohio, said in a statement.

The comments came during a conference call with Matthew Albence, the acting director of Immigration and Customs Enforcement, and Mark Morgan, the acting commissioner of Customs and Border Protection.

Both agencies are under pressure to dramatically scale back their operations amid the virus outbreak.

Democrats, for example, have called on the Department of Homeland Security to place a freeze on all deportations. Democratic lawmakers have also demanded detainees—including criminals—be released from ICE custody, criticized the DHS decision to turn back all illegal migrants, and want construction on the border wall to cease.

“While Americans are forced to stay at home and out of work, Democrats want to release detained illegal aliens, the majority of whom have criminal records, and also provide them with stimulus checks,” said government operations subcommittee ranking member Jody Hice.

“It’s unthinkable that anyone would push to give those who have broken the law more freedoms than law-abiding Americans,” Hice, R-Ga., said.

To be sure, immigration agencies have taken steps to mitigate the spread of COVID-19. ICE announced it would focus its enforcement operations on aliens who pose a risk to public safety, and the agency has so far released nearly 700 aliens from its custody.

Albence told lawmakers during the committee briefing that ICE has reduced its detainee population to 70% or less in order to allow more social distancing, protecting both detainees and officers.

The agency is implementing screening processes for new detainees, and is spacing out cells and dorms, Albence added.