What You Need to Know About Antibody Tests for COVID-19 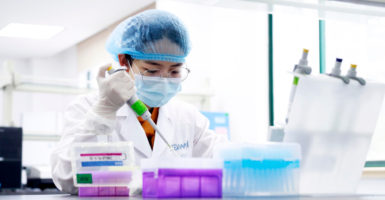 Returning to a semblance of normalcy in this country will require the ability to gauge a person’s immunity status to the COVID-19 virus using serology tests—that is, blood tests that detect antibody levels.

People who were infected by the virus and recovered generated a durable immune response by developing antibodies to antigens specific to the virus.

That is to say, the body’s immune system creates molecules called antibodies that are designed to target and attack certain unique features of the virus called antigens.

In this way, knowing the immune status of the population will be important to assessing the risk of the community returning to work.

Furthermore, being able to detect an individual’s immune status will also help public health researchers and officials determine the virus’ penetrance, the extent to which it has infected the population.

This is possible because certain antibodies persist in the blood long after the infection, even if an individual never showed any symptoms from the virus.

The ability to detect previous asymptomatic infections will be important because recent evidence suggests that a potentially large proportion of infected people never show symptoms.

Universal COVID-19 screening on hospital labor and delivery wards in New York City found that, of the women who tested positive for the virus, 29 out of 33 were asymptomatic at diagnosis. Of those 29 women, 26 of them remained asymptomatic, while only three developed fevers.

All 33 of them, even after they have recovered, will be positive for antibodies if tested.

The above study is small, and being in New York City, the study will oversample people who are infected, but it does strongly suggest that the prevalence of the virus is much greater than the number of confirmed cases in America would lead us to believe.

With antibody tests, we will have a better idea of this prevalence.

The Food and Drug Administration recently granted an emergency use authorization to several new tests to detect antibodies in the blood.

This is part of the administration’s effort to move rapidly in response to the pandemic, but there’s one important caveat to using these tests: Because they have emergency authorizations rather than actual approvals, the sensitivity data and positive predictive values are not necessarily known.

A test’s sensitivity is a measure of its ability to detect what it’s intended to detect. If the test turns out to be relatively insensitive, it will miss a large portion of people who have the antibody present in their blood and suggest that they are still susceptible to the disease.

Such a result would give someone false confidence of their immunity, and this person could potentially become infected and become the point of a new resurgence in the disease.

However, it’s likely that these tests will be more reliable than not. The three emergency use authorizations recently granted by the FDA were to Mount Sinai Laboratory, Chembio Diagnostic System, and Ortho Clinical Diagnostics, all of which either conduct or produce millions of tests or produce test equipment every year.

How these tests will be employed will be left up to the states and localities, but they are a key “gating” feature of the White House’s plan to reopen America, particularly for higher-risk individuals.

To monitor the activity of the virus, the states will need to actively use both kinds of tests—the antibody tests and the current polymerase chain reaction tests, or PCR tests, that amplify viral nucleic acid.

That’s because PCR tests detect viral RNA, which is present in an active infection. Thus, PCR is needed for current cases of COVID-19. The body generates an antibody response later in the disease course, so the serology tests will not be positive for days or weeks after the onset of symptoms, depending on what kind of antibodies are being tested for.

The presence of antibodies confers immunity to the virus, but it will still be absolutely necessary to continue practicing good hygiene and exercise caution.

Immunity to the COVID-19 virus is not invincibility, and there is some question about how long the immunity will last or how complete it is.

Current evidence suggests that the virus’ genetic code is relatively stable so it should not evade our immune system each year the way influenza does, but as it is a new virus, there is still much that scientists and clinicians do not know.

For most people, antibodies should confer protection from the virus. With more antibody testing, we can learn more about our immune response to the virus. It will give us a better idea of who can return to work and when.