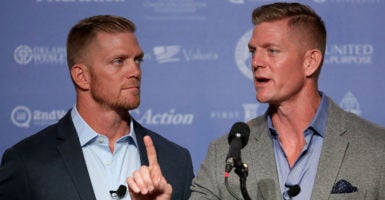 "We are an essential business," David Benham, board chairman of Cities4Life, said when local police asked him and his volunteers to stop counseling pregnant mothers outside of an operating abortion clinic. Pictured: David Benham with twin brother Jason Benham addresses the Values Voter Summit at the Omni Shoreham on Sept. 9, 2016, in Washington, D.C. (Photo: Chip Somodevilla/Getty Images)

If there’s one thing David Benham isn’t social distancing from, it’s his convictions.

So when police showed up outside a North Carolina abortion clinic that was still operating on Saturday and told his group to stop counseling pregnant moms, he didn’t blink. If abortions can continue during the coronavirus, he insisted, then so should pro-life ministry.

Local officials didn’t agree. When they asked the Cities4Life volunteers to leave, David refused. “We are a federally recognized 501(c)(3) public charity,” he insisted. “We are an essential business.”

Not only that, he argued, but the group has followed every possible government guidance—sanitizing and staying at least 6 feet apart. That didn’t seem to matter.

“They’ve been after us for years,” Benham said later about the leaders in Charlotte. “Against conservative voices. So once this crisis hit, this was their opportunity for a power grab.”

In the video that went viral, Benham can be heard telling the police, “You know I am well within my constitutional authority to be here. You know that we are doing the right thing. If you’re saying that we don’t have the right to be here, then go in the abortion clinic and make the arrests there.”

The officer replied, “I don’t have the authority to go in the abortion clinic.”

Amazingly, the officers reached for their handcuffs—arresting Benham and a handful of others, including his 20-year-old son. He almost started to cry, he admitted later, because he just couldn’t believe his country would do this.

“And it wasn’t the officers,” he insisted. “It’s whoever’s instructing the officers. I can’t believe we’ve gotten to this point where we’re going to use a national health care emergency … [to] steal constitutional rights from pro-life Christians.”

Sen. Ted Cruz, R-Texas, couldn’t believe it either. He was appalled at the video and on Twitter called it a completely “unconstitutional arrest.” Benham, he exclaimed, was “exercising [his] First Amendment rights. PEACEFULLY. In a way fully consistent with public safety.”

But, that’s what you get when the states elect pro-abortion Democrats who decide to use their authority in a “one-sided way to silence pregnancy counselors.” [Democrat] Gov. Roy Cooper, Cruz shook his head, “should be ashamed.”

Although Benham was released that same Saturday, the story is far from over. Attorneys at Alliance Defending Freedom are more than happy to point out the error of the city’s ways—in court, if necessary.

This is viewpoint discrimination, plain and simple. If abortion is “essential,” then persuading moms to choose life is, too. The coronavirus is deadly, but so is Roe v. Wade.

Good for the Benham brothers for refusing to be intimidated—not even in the face of bogus charges like Charlotte’s. The crisis facing the unborn doesn’t take a break when the rest of the world does. Sometimes it takes a stand like this one to remind us.