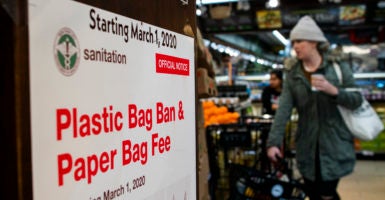 New York state banned distribution of single-use plastic bags, but the coronavirus pandemic has put the law on hold. Pictured: A woman carries her own reusable bag as she goes shopping March 1 at a supermarket in New York City. (Photo: Eduardo Munoz Alvarez/Getty Images)

As the nation and the world confronts a deadly pandemic, and citizens, businesses, and governments do all they can to tamp down the spread of the coronavirus, some useless measures instituted in less turbulent times will go by the wayside.

One of these useless measures is plastic bag bans, which have been proliferating in recent years with the aid of environmentalist activists.

New Hampshire Gov. Chris Sununu issued an order Saturday telling all grocery and retail stores to move away from reusable bags and transition to disposable plastic and paper bags.

“Our grocery store workers are on the front lines of #COVID19, working around the clock to keep NH families fed,” Sununu, a Republican, said on Twitter. “With identified community transmission, it is important that shoppers keep their reusable bags at home given the potential risk to baggers, grocers, and customers.”

This comes just over two months after the New Hampshire House of Representatives passed legislation to ban plastic bags in the state. The legislation remains in committee in the state Senate.

New Hampshire is not alone.

New York state has put its recently passed ban on plastic bags on hold for now.

In fact, states and cities around the country have been suspending their plastic bag bans too. And there is a growing call for places that still have the bans in place to bring them to an end during the outbreak.

These actions reveal the fact that not only are the bans marginal or even detrimental in their environmental impact—more on that later—but they are also a public health hazard.

Reusable plastic tote bags are a good carrier for bacteria and viruses, the coronavirus included. As John Tierney wrote for City Journal, numerous studies have provided evidence that reusable bags are unsanitary.

In one study that Tierney highlighted, published in the Journal of Environmental Health in 2018, researchers planted a surrogate virus on the bags of three shoppers who went into grocery stores. After they bought their groceries and checked out, researchers found the virus “on the hands of the shoppers and checkout clerks, as well as on many surfaces touched by the shoppers, including packaged food, unpackaged produce, shopping carts, checkout counters, and the touch screens used to pay for groceries.”

This is a scary prospect as countless Americans have their only contact with the general public when they go to grocery stores, making the efforts to curb the spread of COVID-19 much more difficult.

Of course, some climate activists aren’t going to be dissuaded, even at this time.

Larissa Copello de Souza, a campaigner at Zero Waste Europe, said, according to The Wall Street Journal: “We cannot forget and disregard the other big current challenges we are also currently facing.”

By this she means climate change and plastic buildup.

“Promoting the use of reusables is certainly one of the greatest practices we can have to address those issues,” Souza said.

The problem with this mentality, beside perhaps misplaced priorities, is that the plastic bag bans are ineffectual even if the primary concern is the environment.

A study in Australia by University of Sydney economist Rebecca Taylor demonstrated that bans on plastic shopping bags do not significantly cut down on waste; more people buy thick garbage bags to line their trash cans after the bans are put in place.

The bottom line is, the current crisis has revealed the misguided nature of plastic bag bans, and now cities and states must move quickly to prevent these bans from exacerbating the coronavirus pandemic.

In the coming days, Americans will have to take many actions and adjust their lives to stop the spread of COVID-19. Serious times and serious matters will force us to abandon virtue signaling and restore common sense.