Senate Bill Would Give $1,200 to Many Americans as COVID-19 Relief 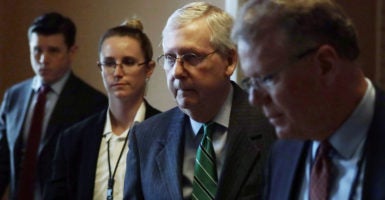 Senate Majority Leader Mitch McConnell said Thursday that the Senate will not leave Washington before approving an aid package to ease financial problems during the coronavirus pandemic through direct payments to individual Americans.

Other provisions of the package, which has a total cost estimated at up to $1 trillion, would provide loans to airlines and other struggling industries.

After reaching those income thresholds, relief would scale downward to as low as $600 for some Americans.

>>> Related: Trump Clears Way to Use Malaria Drug Against COVID-19

The Democrat-controlled House would have to pass a version of the bill. The Trump administration already has signaled support for many of the initiatives.

“Senate Republicans want to put cash into the hands of the American people,” McConnell said in a Senate floor speech.

McConnell said the goal of the bill—called the Coronavirus Aid, Relief, and Economic Security Act, or CARES Act—is to “get assistance to individuals and families as rapidly as possible.”

“No tangled Washington process with a thousand cooks in the kitchen, no piles of forms for laid-off workers or busy families to fill out,” the top Senate Republican said. “Money for people, from the middle class on down.”

The bill also includes a $500 payment for each child in a household, depending on family income.

This stage marks “phase three” of economic relief packages during the coronavirus pandemic that have gained bipartisan support in Congress.

The proposed CARES Act includes direct payments to Americans, as well as delays in employer payroll taxes and estimated tax payments for businesses.

The proposal also would provide $208 billion in loan guarantees, including $50 billion for the airline industry and $8 billion for air cargo carriers.

The total confirmed U.S. cases of COVID-19 reached 10,442 as of noon Thursday, with 150 confirmed deaths, according to the Centers for Disease Control and Prevention.

Some conservatives, including Sens. Rand Paul, R-Ky., and Mike Lee, R-Utah, showed reluctance to support too much spending or large bailouts for industries.

McConnell likely will need support from Democrats to pass the legislation.

In a joint statement from House Speaker Nancy Pelosi, D-Calif., and Senate Minority Leader Charles Schumer, D-N.Y., the Democrats made other demands. It said, in part:

The number one priority is addressing this health crisis, which requires a Marshall Plan to rebuild our health care infrastructure on a continental scale and ensure the resources are there to test and treat everyone who needs it. To earn Democratic support in the Congress, any economic stimulus proposal must include new, strong and strict provisions that prioritize and protect workers, such as banning the recipient companies from buying back stock, rewarding executives and laying off workers.