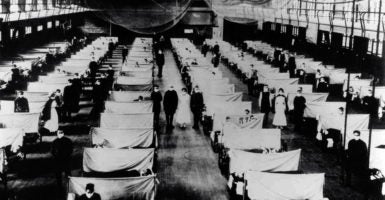 Hardly anything that happens in this world is truly unprecedented.

As Americans respond to the coronavirus pandemic, which began in China, with canceled events, business closures, and aggressive social distancing, many are taking an interest in another great pandemic that took place a hundred years ago.

“We have an invisible enemy. We have a problem that a month ago nobody ever thought about,” President Donald Trump said in a press conference Monday on the new coronavirus disease, which health officials call COVID-19.

“It’s just so contagious. Sort of record-setting-type contagion,” he said.

The other invisible enemy in 1918 that Trump referred to was the Spanish flu.

The Spanish flu was a transformative world event that has been somewhat obscured and overshadowed by the fact that it took place at the tail end of World War I. But it had enormous consequences for those who lived through it.

Though the Great War upended global political dynamics perhaps more than any other war in history, the flu killed more people.

The true origin of the Spanish flu remains somewhat uncertain, despite the name. The pandemic did not actually begin in Spain at all—breakouts had occurred in the United States, France, and Great Britain before the flu reached Spanish shores.

The first reported case of the Spanish flu was at Camp Funston, a U.S. Army training ground at Fort Riley, which was home to tens of thousands of troops preparing for deployment to Europe.

Mess cook Albert Gitchell went to the infirmary with a fever and various other symptoms on March 4, 1918, and soon was followed by a flood of others.

However, Spain was unique in that it had stayed neutral during World War I and had lighter censorship. When Spanish King Alfonso XIII fell ill with the disease it began to be associated with Spain and the name “Spanish flu” ultimately stuck.

The flu spread rapidly across the globe, and it came in waves over a period of about two years.

There were three main waves, though there is some evidence of a fourth wave. The second wave, which emerged in the fall of 1918, was the deadliest.

This second, mutated, and deadlier strain of Spanish flu tore through the armies of Europe, slowing down the progress of the war and undoubtedly adding to the horror of daily life for the average soldier living in the trenches on the Western Front.

Things weren’t much better on the home front, as communities and whole countries were utterly waylaid.

And unlike COVID-19, which at the moment appears to disproportionately affect older people, the Spanish flu was particularly lethal to young men and women—though especially men—in their 20s and 30s.

Symptoms ran the gamut from the fairly mundane, such as sore throats, fevers, and body aches, to the more severe, such as blue and purple splotches on the face and blurred vision.

As the Spanish flu raged out of control, communities and governments took measures to control the outbreak.

Historian Laura Spinney, in her book “Pale Rider: The Spanish Flu of 1918 and How It Changed the World,” explained the methods used to stop the spread of the disease.

Despite the fact that health officials poorly understood the flu, and viruses in general, their methods for containment were quite similar to today.

“In 1918, as soon as the flu had become reportable and the fact of the pandemic had been acknowledged, a raft of social distancing measures were put in place—at least in countries that had resources to do so,” Spinney wrote. “Schools, theatres, and places of worship were closed, the use of public transport systems was restricted and mass gatherings were banned.”

Quarantines at ports, isolation of infected patients at hospitals, and public awareness campaigns to inform citizens—many of whom were suspicious of modern medicine, then in its infancy—also were used to stop the contagion, Spinney wrote.

There were often dramatic efforts to stop the spread of the disease, but the sheer number who were infected and died was staggering.

It is estimated that one-third of the global population became infected with the Spanish flu.

The flu ultimately killed around 50 million worldwide, according to the Centers for Disease Control and Prevention. An estimated 675,000 died in the United States, far exceeding the number of Americans killed in action in World War I.

The Spanish flu was the deadliest pandemic in world history, measured by total casualties.

And perhaps a surprising number of world leaders got sick besides the king of Spain.

President Woodrow Wilson contracted the Spanish flu in 1919 during peace talks following the Great War, though the extent of his illness was hidden from the public.

Despite public assurances that the president simply had a cold, Wilson’s personal physician, Rear Adm. Cary T. Grayson, wrote worryingly of his condition in April 1919: “These past two weeks have certainly been strenuous days for me. The President was suddenly taken violently sick with the influenza at a time when the whole of civilization seemed to be in the balance.”

The world did, too, at least from the flu, if not Wilson.

Over the last century, medicine has advanced far beyond what was known in 1918, when a virus wasn’t even observable with the microscope technology of the time.

Even more, our treatment methods and care for the sick for every cross section of society has improved immeasurably.

It would be a mistake to simply draw parallels between that time and ours; the world has changed quite a bit since the Spanish flu erupted.

Nevertheless, the devastation it caused is a good lesson in why infectious diseases are serious business that can quickly and easily upend our way of life. We have every reason to take precautions against COVID-19 and ensure another great pandemic on the scale of the Spanish flu does not take place in our time.