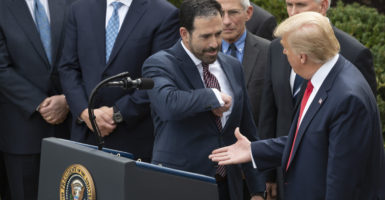 To better coordinate the federal government’s response, President Donald Trump on Friday declared the coronavirus to be a national emergency, temporarily waiving a host of laws and regulations and teaming with the private sector.

“To unleash the full power of the federal government in this effort, today I am officially declaring a national emergency—two very big words,” Trump said in the Rose Garden of the White House.

Flanking the president were several business CEOs and top administration officials who are part of the White House’s coronavirus task force.

The administration is working with retailers and drugmakers to set up drive-thru coronavirus testing clinic locations, Trump said. It also is working with Google to help Americans find testing locations online.

“The action I am taking will open up access to up to $50 billion of—very importantly, very important, and a large amount of money—for states and territories or localities in our shared fight against this disease,” Trump said.

Trump indicated he would be tested himself for the new coronavirus disease, dubbed COVID-19 by health officials, after interacting last week with a delegation from Brazil, one member of which later tested positive.

Asked if he would be tested, Trump replied, “Most likely.” He said it would be “fairly soon.”

Earlier in the same press conference, however, Trump said he wouldn’t take precautions because he had “no symptoms whatsoever.”

Many executive actions under the national emergency will involve waiving government regulations.

“We had some very old and obsolete rules,” Trump said. “We’re breaking them down now.”

Trump announced that laws and rules also will be waived to allow more telemedicine, to allow hospitals to bring more physicians on board or obtain additional office space, and to increase the number of hospital beds that can be used. He also mentioned waiving some rules on hospital stays, admissions to nursing homes, and what hospitals can do to allow more space.

The president said he would suspend interest on student loans owed to federal institutions.

“I want you to know that your federal government will unleash every authority, resource, and tool at its disposal to safeguard the lives and health of our people,” Trump said in his formal remarks.

The president didn’t specify which law he is applying.

The CEOs with Trump were from Quest Diagnostic and from the Walmart, Target, CVS, and Walgreens retail chains, among others.

With regard to the tests, Trump said: “We don’t want everybody taking this test; it’s totally unnecessary. And this will pass.”

Asked whether he was responsible for delays in testing because his administration eliminated a National Security Council position in charge of pandemics, Trump said: “I don’t take responsibility at all, because we were given a set of circumstances.”

The president went on to talk about how his predecessor, Barack Obama, handled the H1N1 virus.

“They had a very big failure with swine flu,” Trump said.

Heritage Foundation President Kay C. James said in a formal statement that the president’s actions can be a turning point if Americans pull together:

Though the White House’s action may be called an ‘emergency declaration’ in the legal sense, in reality it is a reassurance to the American people that the federal government, state governments, non-governmental organizations, and the powerful workhorse of American industry are working together tirelessly to stop the spread of the coronavirus, to treat the infected, and to mitigate its effects on our country. It is a clear signal to the American people that the federal government is fully doing its part to complement and reinforce states’ valiant efforts to combat the coronavirus.