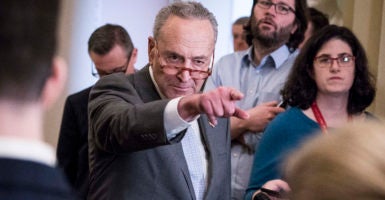 Senate Minority Leader Charles Schumer may become only the ninth senator in the body’s history to be censured by his colleagues.

Lawmakers in the Senate and House introduced resolutions to censure him Thursday, a day after Schumer made inflammatory comments that seemed to some to advocate violence if two Supreme Court justices did not rule his way in an abortion case.

Sen. Josh Hawley, R-Mo., introduced a measure in the Senate that 14 other Republicans so far have co-sponsored.

In the House, Rep. Andy Biggs, R-Ariz., introduced a similar resolution of censure.

During a pro-choice rally Wednesday on the steps of the Supreme Court, Schumer, D-N.Y., spoke directly to Justices Neil Gorsuch and Brett Kavanaugh, both appointed to the high court by President Donald Trump.

“I want to tell you, Gorsuch. I want to tell you, Kavanaugh,” Schumer said, according to video of his remarks. “You have released the whirlwind, and you will pay the price. You won’t know what hit you if you go forward with these awful decisions.”

The eight senators previously censured in U.S. history were censured by their Senate colleagues, not by the House. Although no rule prevents the House from censuring a senator, it’s not likely in a Democrat-controlled House.

Hawley’s censure resolution in the Senate states, in part:

Senator Schumer has acknowledged that threatening statements can increase the dangers of violence against government officials when he stated on June 15, 2017, following the attempted murder of several elected Members of Congress, ‘We would all be wise to reflect on the importance of civility in our [N]ation’s politics’ and that ‘the level of nastiness, vitriol, and hate that has seeped into our politics must be excised.’

Biggs, in introducing a similar resolution in the House, said in a written statement:

Threats towards any elected or appointed member of the three branches of our constitutional government are wrong and cannot be tolerated.

Minority Leader Schumer is the leader of his [Democratic] conference, and, while he may offer public criticism about decisions with which he disagrees, he should not use rhetoric that is threatening and intimidating towards members of our independent judiciary.

The Arizona Republican added that amid public criticism, including from Chief Justice John Roberts, Schumer didn’t back down.

“Even after he was called out by many of his own colleagues and the chief justice, Leader Schumer would not apologize for his threats,” Biggs said. “I am introducing this resolution today to send a message that this threatening rhetoric has no place in the U.S. Congress—especially from a leader of one of our parties.”

Schumer did not apologize Thursday in remarks on the Senate floor, but said he should have used different words.

“I shouldn’t have used the words I did. But in no way was I making a threat,” the Senate’s top Democrat said, adding: “And Republicans who are busy manufacturing outrage over these comments know that too.”

Many of the previous censures of senators involved corruption or ethics cases.

The notable censure of Sen. Joseph McCarthy, R-Wis., on Dec. 2, 1954, said he did not cooperate with a 1952 investigation conducted by a Senate subcommittee on privileges and elections and “abused” a Select Committee to Study Censure.

The first member of the Senate to be censured was Sen. Timothy Pickering, a Federalist from Massachusetts, on Jan. 2, 1811. His offense, according to the Senate, was “Reading confidential documents in open Senate session before an injunction of secrecy was removed.”

The most recent Senate censure came on July 25, 1990. Colleagues said Sen. David Durenberger, R-Minn., engaged in unethical conduct by “his structuring of a real estate transaction and receipt of Senate reimbursements in connection with his stays in his Minneapolis condominium, his pattern of prohibited communications respecting the condominium, his repeated acceptance of prohibited gifts of limousine service for personal purposes, and the conversion of a campaign contribution to his personal use.”

Condemnation of Schumer was especially harsh in legal circles.

“This is an outrageous statement that amounts to a threat against sitting Supreme Court justices,” said David Rivkin, who worked at the Justice Department and the White House Counsel’s Office during the administrations of Ronald Reagan and George H.W. Bush.

“It is designed to intimate them,” Rivkin said in a written statement. “This behavior cannot be countenanced. Indeed, it has to be condemned as an unconstitutional conduct.”

Among rare defenders was Daniel Goldberg, president of the left-wing legal group Alliance for Justice, who criticized Roberts instead.

“It’s unfortunate that Chief Justice Roberts’ attempt to defend the integrity of the Supreme Court instead highlighted his own partisan biases,” Goldberg said, adding:

Sen. Schumer has been a stalwart champion for health care rights, including defending the right to abortion from constant legal threats. His comments reflected widespread concern that the court is considering overturning a ruling it issued just four years ago, as demonstrated by the massive rally he was speaking to. … Schumer wasn’t wrong that if the Supreme Court violates its own precedent simply to advance the conservatives’ partisan agenda, there will be a significant public backlash.

“Sen. Hawley is right that censure would be appropriate,” Slattery said Thursday. “Sen. Schumer took to the Senate floor earlier today. He said he was offering an apology. In my view, he seemed to be saying, ‘Sorry, but I’m not sorry.’”

“Clearly, enough people didn’t know what Schumer purportedly meant,” Slattery added. “An opinion writer for The Washington Post, the American Bar Association, all sorts of institutions that are not exactly conservative, have come out to condemn what Sen. Schumer has done.”