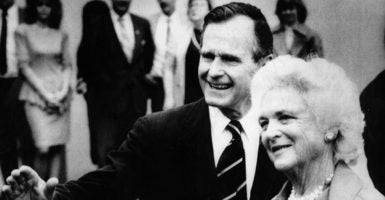 Super Tuesday is typically the closest thing to a national primary election in the United States. It got the “super” name with as many as 24 state contests and as few as three in a single day.

On March 3 this year, it falls somewhere in between as 14 states and American Samoa hold presidential contests. Over the years, the states holding primaries on Super Tuesday have varied.

Here are four keys to understanding the legacy of this single day in picking a president.

The origin of Super Tuesday actually has as many as four answers, depending on the source.

The New York Times first used the term during the 1976 presidential contests as a hyphenated “super-Tuesday.”

That first Super Tuesday came when six primaries were held May 25, according to the National Constitution Center. It was the day that President Gerald Ford and his challenger, former California Gov. Ronald Reagan, each won three states as they fought it out for the Republican nomination.

The Democrats had a crowded field that year. Eventually, Ford and former Georgia Gov. Jimmy Carter won their parties’ nominations.

In 1980, one Super Tuesday occurred as Alabama, Florida, and Georgia held primaries March 11.

The term Super Tuesday also was used to describe the final Tuesday in June, with voting in eight states that Kennedy unsuccessfully targeted for wins.

That year, Reagan beat a crowded Republican field to win the GOP nomination to take on Carter, who staved off a challenge from Kennedy for the Democratic nomination.

Southern Democrat governors and officeholders organized the modern Super Tuesday in 1988 to avoid a repeat of 1972 and 1984, when the party nominated liberal candidates that lost 49 states.

“Southern Democrats did not want another George McGovern, so to try to ensure a more centrist candidate, they pooled together to have southern primaries on the same day,” Shirley said.

In 1988,  then-Sen. Chuck Robb, D-Va., said Super Tuesday was designed to reduce the “Iowa syndrome,” regarding too much emphasis from candidates on the Iowa caucuses.

“The 1988 primaries were designed to help Al Gore,” Shirley said, referring to the Tennessee Democrat, who was then in the Senate. “But Jesse Jackson and Al Gore ended up splitting the southern vote, and [eventual Democratic nominee] Michael Dukakis came through the middle.”

3. When Super Tuesday Was Decisive

Eventually, numerous states from across the country jumped aboard for Super Tuesday, and it’s no longer a regional event, Shirley said.

“Now it’s just a big mess, with California and Minnesota and no ideological harmony or regional character,” Shirley said.

That first Super Tuesday in 1988 was key in helping Vice President George H.W. Bush stop whatever momentum Sen. Bob Dole of Kansas had gained from winning the Iowa caucuses.

Bush went on to thump Dukakis, the Massachusetts governor, in November.

“In 1988, Super Tuesday was definitive for both Republicans and Democrats,” Shirley said.

This occurred after Clinton became a rare candidate to be nominated after losing contests in the earliest two states, Iowa and New Hampshire.

Only 11 states were part of Super Tuesday in 1992, including  some outside the South: Delaware, Florida, Hawaii, Louisiana, Massachusetts, Mississippi, Missouri, Oklahoma, Rhode Island, Tennessee, and Texas.

Dole, facing a crowded Republican primary field in 1996, swept all seven Super Tuesday states in 1996, forcing most of the other Republican candidates to drop out, though Pat Buchanan held on a little longer.

Dole went on to lose to Clinton that November.

Gore, the eventual Democratic nominee, also won those states, and former Sen. Bill Bradley of New Jersey dropped out after not winning a single contest.

The year 2004 saw a mini-Super Tuesday with five states on Feb. 3 followed by a March 2 Super Tuesday II with 10 states.

Sen. John Kerry of Massachusetts won all but Oklahoma on Feb. 3 and all but Vermont on March 2 to secure the Democrats’ nomination. He lost to the incumbent Bush in November.

In more recent contests, going back to 2008, it has been a tougher slog for presidential candidates that continues beyond Super Tuesday.

So the Republican primaries continued.

The Democrats were in for a much longer contest between Sen. Hillary Clinton of New York and Sen. Barack Obama of Illinois when Democrats had 23 contests Feb. 5, resulting in a delegate deadlock when Clinton won 10 states and Obama won 13.

In 2012, Romney entered the GOP contest as the frontrunner, but couldn’t close the deal even on Super Tuesday. He won six of the 10 contests March 6, losing three to former Sen. Rick Santorum of Pennsylvania and one to former House Speaker Newt Gingrich of Georgia.

In 2016, Republicans and Democrats both continued their primaries after Super Tuesday when no candidate won a majority of convention delegates. But, each contest gave a picture of where the nomination battle was going.