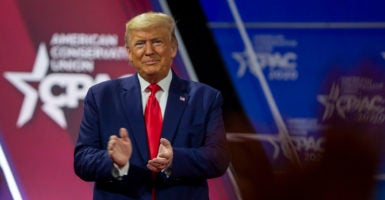 “It’s sort of a miracle when you think about it,” says President Donald Trump, here acknowledging the enthusiastic crowd in his appearance Saturday at the Conservative Political Action Conference in National Harbor, Maryland. (Photo: Tasos Katopodis/Getty Images)

Speaking before a celebratory crowd of conservative activists Saturday, President Donald Trump gave thanks to God for being able to accomplish so much in three years despite incoming fire from the left.

Trump referred to both the lengthy Russia investigation and House Democrats’ hasty impeachment move during remarks at the Conservative Political Action Conference just weeks after the Senate found him not guilty in a historic impeachment trial.

“Can you imagine with all of that—going through all of that with a cloud over your head like nobody has ever had—for us to have seriously done more than any other administration?” Trump said to the cheering crowd.

Trump, in a freewheeling speech delivered without a script in just under an hour and a half, pondered other options before settling on divine help.

In mentioning the impeachment trial, the president referred to Sen. Mitt Romney, R-Utah, the lone Senate Republican who voted to convict him for abuse of power.

Earlier Saturday, the United States and the Taliban signed a peace agreement for Afghanistan that could mean U.S. troops finally depart that country after 19 years.

The historic deal, Trump said, may end “the longest war in U.S. history, not even close.”

“I’ll say this for the Taliban, they’re great fighters,” he said. “You can ask the Soviet Union. But they’re tired also.”

The U.S. and allies invaded Afghanistan in October 2001 because the Taliban was providing shelter and resources there for the al-Qaeda terrorist group that planned the 9/11 attacks on America that killed nearly 3,000.

The United States can’t get caught up in building democracies, Trump said.

“American forces cannot be the policemen for the world,” he said. “We’re all over the world and a lot of times, we’re not appreciated. It’s taken for granted.”

“After years of rebuilding foreign nations,” he added to huge applause, “we are finally rebuilding our nation and taking care of our own American citizens.”

Trump, echoing his State of the Union address Feb. 4, cited record low unemployment amid what he called the “great American comeback.”

Trump said 10 million people are off welfare roles and 7 million are off food stamps.

The president then made a reference to his predecessor, Barack Obama, whose 2008 campaign slogan was “hope and change.”

“We are actually achieving the progress, ‘hope and change,’ that liberals have been falsely promising for decades, but utterly failed to deliver or produce—and it’s really driving them crazy,” Trump said.

Trump acknowledged he wasn’t a typical politician or nice guy.

“You’ve had a lot of really nice people running the country,” he said. “Maybe I’m not nice, but I’m doing a great job for you.”

Trump took only a few jabs at the media and “fake news.”

“It would be so much easier for our country if we had a press that told the truth,” he said.

After holding a White House press conference earlier in the day on the spread of the coronavirus, Trump brought up his administration’s response at CPAC, saying:

Border security is also health security. In our efforts to keep America safe, my administration has taken the most aggressive action in modern history to control our borders and protect Americans from the coronavirus.