Patriots’ Ben Watson: ‘Men Have to Stand Beside Women We Impregnate’ 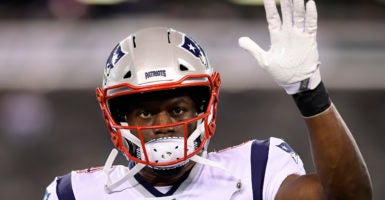 Caring for both children and women "shouldn’t be an ‘either or’ proposition,” New England Patriots tight end Ben Watson says. Pictured: Watson warms up Oct. 21 before a game against the New York Jets at MetLife Stadium. (Photo: Steven Ryan/Getty Images)

New England Patriots tight end Ben Watson, joining pro-life activists at the March for Life, said that “men have to stand beside the women we impregnate.”

Watson discussed his upcoming documentary “Divided Hearts of America” in an exclusive interview Friday with The Daily Caller News Foundation at the 47th annual pro-life rally and march in Washington.

The pro-life father of seven started filming the documentary in May 2019. The movie is budgeted at less than $1 million and financed by donors and by Watson’s One More Foundation, an organization focused on issues such as hunger, poverty, and prison reform.

“I think that the whole abortion issue obviously is an important one, but I think in the last year or so with so many different laws coming out, some liberal, some conservative, there’s just been a heightening of awareness,” Watson said.

“The film’s kind of about my journey figuring out the truth about these laws, but also just about abortion in general. Right? Who does it hurt? How do we support women and men that are going through this?”

Watson said his status as a pro football player does not necessarily have anything to do with the documentary, set to be released later this year. He said he wants people to focus on the justice issues the film discusses.

The theme of the 2020 March for Life was “Life Empowers: Pro-Life Is Pro-Woman,” and Watson said that “of course” being pro-life means being pro-woman.

“I think there’s a misconception that the pro-life movement–people that would call themselves pro-lifers only care about babies, don’t care about women,” the NFL player said, adding:

We as men have to stand beside the women we impregnate. That’s the message that a lot of people don’t want to talk about. But if men will stand up and care for women the way we’re designed to, a lot of these things wouldn’t happen.

Being pro-life should mean caring both for children and for women, Watson said.

“It shouldn’t be an ‘either or’ proposition,” he said.