On Surprise Medical Bills, Congress Should Side With Consumers, Not Special Interests 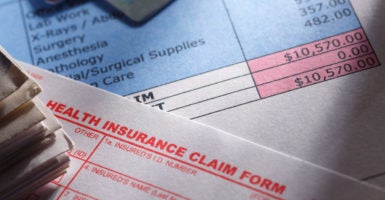 Patients who try to follow insurance company rules sometimes can be hit with surprise bills through no fault of their own. (Photo: Getty Images)

Congress’s failure to protect patients against a manifestly unfair practice has nothing to do with a partisan environment consumed by efforts to remove President Donald Trump from office.

Instead, as Doggett observed, it has to do with Congress’ inability to appease rival interest groups—insurance companies and medical providers—who share blame for creating the problem.

To break the logjam, Congress should pursue a third way, one that would eliminate surprise bills by giving patients honest information before they receive care.

What neither insurers nor hospitals tell patients is that they might also receive services from another doctor at that “network” hospital—a radiologist or anesthesiologist, for example—who is not part of their insurance company’s network.

In other words, even if someone goes to the emergency room at a hospital in their insurance network, if the doctor on duty that night happens to be out-of-network, the patient could suddenly be faced with a bill that is thousands of dollars—and not covered by their insurance.

Weeks or months later, they will get a bill for the difference between what the non-network doctor charges and what their insurance company pays, a practice known as “balance billing.”

Patients treated at network hospitals never should be balance billed, whether for scheduled or emergency care.

Unfortunately, this is not the approach Congress is considering.

Instead, it is pursuing a flawed and unsustainable search for an elusive “middle ground” between two powerful interest groups that offer competing and faulty solutions to the surprise billing problem.

Insurers and providers agree patients should not be balance-billed. But each interest group wants the federal government to impose a regime that best serves its financial interests.

Both approaches involve government rate-setting, a wrong-headed idea  that would invite further government intervention in the private practice of medicine.

Doctors want to outsource rate-setting to government-certified arbiters. Arbitration—including baseball arbitration, to which this approach is falsely compared—is a process in which contracting parties agree to submit disputes to an arbiter and to bind themselves to the arbiter’s ruling. The arbitration proposal on surprise billing is entirely different, because there is no contract between the doctor and the insurer.

Instead, government would bind non-contracting parties to a process to which neither has agreed, essentially franchising the rate-setting process to arbiters, who would set medical prices on an ad hoc basis.

Congress remains caught in the interest group crossfire, even as both sides continue to benefit from surprise bills at the expense of patients.

Instead of choosing between these bad ideas or, worse, finding some way to combine them, Congress should require hospitals and insurance companies to deal honestly with consumers. A hospital that grants privileges to doctors who balance bill patients cannot represent itself as a network hospital. Nor can an insurance company tell its customers that such a hospital is in-network.

That leaves the special case of emergency care at non-network hospitals—another circumstance in which patients can get hit with surprise bills. A patient with severe chest pains or one riding in the back of an ambulance can’t shop for a network hospital. Congress can protect such patients by banning non-network hospitals from balance billing for emergency care. Federal regulations currently stipulate that insurers must pay such hospitals the greatest of the Medicare rate, the network rate or the out-of-network rate.

These changes, combined with greater price transparency, will both eliminate surprise bills and empower consumers to make better decisions about their medical care.

In seeking to ban surprise bills, Congress shouldn’t takes sides between insurers and providers. Nor should it seek to split the difference between them.

Congress should take the side of consumers.