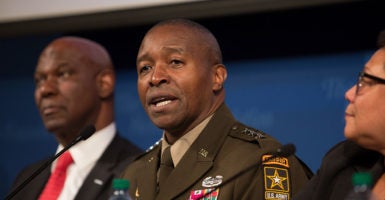 Historically black colleges and universities have been an integral part of the U.S. military’s competitive edge, according to participants in a panel discussion Thursday at The Heritage Foundation’s inaugural forum on HBCUs.

The panel discussion—hosted by James Carafano, a national security expert at The Heritage Foundation—laid out the role HBCUs play in ensuring military readiness and national security in the face of growing international challenges.

Marshall Williams, the Army’s principal deputy assistant secretary for manpower and reserve affairs, said the quality of personnel is key for the U.S. military right now, because we can no longer count on our wealth advantage compared with our chief rivals.

This is the first time in our history, he said, that money isn’t our advantage and that we can’t outspend our opponents.

Where the U.S. does have an advantage is with our people, Williams said.

“We will win against our enemies by having the right people, with the right skills, in the right place, at the right time. That’s how we’re going to do it,” he said.

By strengthening individuals, the U.S. military becomes the most capable force in the world, Williams said.

“There is no doubt that HBCUs are a valuable and powerful resource for our nation in terms of education of young African Americans and giving them the tools to help our country to compete globally,” he said.

Retired Lt. Gen. Gwen Bingham, a former chief of staff for installation management for the Army, echoed the importance of personnel.

Ronal Butler, president of Woodbridge, Virginia-based Networking & Engineering Technologies Inc., said preparation for the kind of readiness needed in the armed forces goes beyond the classroom, and workforce development is essential for students integrating into real-life, high-pressure situations.

“What happens is, we’ve got students who come out, they’ve got the textbook knowledge; they think they understand what’s going on,” Butler said. “But then, when you actually see a monitor, and see all the countries that are hacking into a particular military base per hour, then you understand—’Wow! School kind of got me ready, but this workforce is going to teach me a lot more of what I need to prepare for.’”

Army Lt. Gen. Bruce Crawford said historically black colleges and universities do a particularly good job of preparing people to serve in the armed forces. He explained how he was nurtured as a first-generation college student during his time at South Carolina State University.

Importantly, he said, HBCUs give students important qualities that prepare them for leadership.

Just as importantly, he added, he learned to be deeply competitive during his time at an HBCU.

“What you will find in an HBCU graduate is almost an insatiable appetite to be competitive, ultimately to win,” Crawford said.

In his case, the importance of the school, he said, is that it led to other family members going to college and succeeding.

“When I think about the enduring legacy of an HBCU, it’s not that I got an opportunity to be a first-generation college graduate. It’s not that I had the opportunity because I had powerful mentors who grabbed me along the way,” Crawford explained.