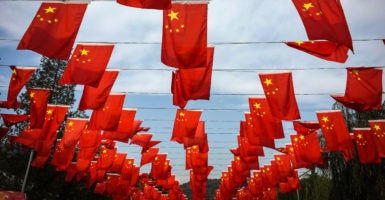 China systematically targets Chinese-born naturalized U.S. citizens to gain access to sensitive information and technology for the Chinese government to further its defense and technology race with the U.S. In theory, China could use birth tourism to its advantage in a similar way. Photo: Getty Images)

“Birth tourism” has become big business. Today, hundreds of companies advertise to pregnant women—particularly upper-middle-class women from China, Nigeria, Russia, and Turkey—offering assistance to get visas that would allow them to visit the U.S. during the time they expect to give birth.

The U.S. hosts tens of thousands of “birth tourists” every year. In 2015, the Center for Immigration Studies pegged the number at 35,000. The Qianzhan Industry Research Institute reported that, in 2016, as many as 80,000 birth tourists came to the U.S. Whatever the total number, it appears to be growing.

What draws these women to our shores isn’t U.S. obstetric or natal care. It’s automatic U.S. citizenship for their babies.

The 14th Amendment declares: “All persons born or naturalized in the United States and subject to the jurisdiction thereof, [emphasis added] are citizens of the United States … .” The government currently interprets this as meaning that anyone born on U.S. soil is a U.S. citizen, regardless of the parent’s nationality or immigration status. Essentially, this reading ignores the qualifying phrase italicized above.

Many Americans have long-questioned this interpretation, which confers the benefits of citizenship on a foreigner with absolutely zero ties to the U.S. Those benefits are legion—and quite expensive.

U.S. citizenship makes a child eligible for free public education and loan programs, government food assistance, Medicaid, and other welfare programs. Costs can run into the billions. Furthermore, when birth-tourist babies become adults, they may then apply for immigrant visas (green cards) for their family members, increasing chain migration.

The wealth of benefits offered by the U.S. are a major selling point for the birth tourism industry. Last January, the Justice Department unsealed indictments for 19 people involved in Chinese birth tourism schemes.

The indictments revealed that the “birthing house” operators told pregnant women that they could seek U.S. visas to obtain the “most attractive nationality,” “priority for jobs in U.S. government,” “free education from junior high to public high school,” and “senior supplement benefits when the parent is living overseas.”

After paying a fee—which ranged from $15,000 to $50,000—each client received coaching on how to pass visa interviews; overstay visas once in the U.S.; and apply for federal benefits.

This kind of fraudulent behavior not only undermines the integrity of our immigration system, it generates national security concerns, as well.

For example, China systematically targets Chinese-born naturalized U.S. citizens to gain access to sensitive information and technology for the Chinese government to further its defense and technology race with the U.S. It is hardly surprising that China would seek to exploit the nation’s birthright citizenship policies to accomplish the same espionage goals with U.S.-born Chinese nationals.

President Donald Trump has heard the call of those clamoring for an end to birthright citizenship and has pledged to end the policy. Since the 14th Amendment does not require universal birthright citizenship, a constitutional amendment is not necessary to change current policy. All that’s needed is a new policy.

And that’s exactly what the State Department is issuing—a final rule designed to combat birth tourism in the United States.

Specifically, the rule amends the State Department’s regulation on temporary visitors seeking a “B” (business or pleasure) nonimmigrant visa. It stipulates that such visas are granted to accommodate temporary visits for pleasure and not visits taken for the primary purpose of giving birth in this country.

It also states that, if a consular officer has reason to believe that a visa applicant would give birth while in the U.S., he or she may presume that the primary purpose is to gain citizenship for the unborn child. Unless the applicant is able to rebut that presumption, she would be ineligible for the visa.

This article has been corrected to reflect that China targets Chinese-born naturalized U.S. citizens to gain access to sensitive information and technology.