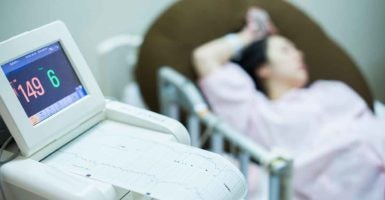 “Women deserve to have doctors and medical professionals who can provide quality care and quickly address any complications that may arise," says Rep. Andy Biggs. (Photo: Getty Images)

A congressman from Arizona and a senator from Louisiana have introduced legislation that would require that all abortion providers have admitting privileges at a local hospital and comply with basic safety standards.

“Abortion providers refuse to accept the reality that an abortion is a serious medical procedure that should be treated with the same care and caution as any other surgery or medical treatment,” Rep. Andy Biggs, R-Ariz., said in a statement provided to The Daily Signal.

Biggs, who introduced the legislation with Sen. John Kennedy, R-La., said it would ensure women would get the best possible care in the event of complications from an abortion. The companion bills are H.R. 5662 and S. 3226.

“Women deserve to have doctors and medical professionals who can provide quality care and quickly address any complications that may arise,” the Arizona lawmaker said. “Requiring doctors and abortion providers to have hospital admitting privileges and to maintain safe and clean clinics should be measures that face little opposition.”

Specifically, the Biggs-Kennedy legislation requires that a doctor performing an abortion “have admitting privileges at a hospital located within 15 miles from the principal medical office of the physician and the location in which the abortion is being performed.”

In a statement provided to The Daily Signal, Kennedy said the legislation, the Pregnant Women Health and Safety Act of 2020, is the baseline for what expectant mothers deserve.

“It’s hard to imagine someone more in need of access to quality medical care than an expectant mother and her unborn child,” the Louisiana lawmaker said, adding:

The abortion industry cuts corners at the expense of vulnerable people, and the Pregnant Women Health and Safety Act would ensure that women have easy access to vital protective care.

I’m thankful to partner with my friend Andy Biggs in this effort to save and improve lives and encourage my colleagues in both chambers of Congress to support this legislation.

The legislation was introduced Jan. 21, just three days ahead of the 47th annual March for Life on Friday in Washington, D.C. The march’s theme is “Life Empowers: Pro-Life is Pro-Woman.”