Is Iran Headed for Regime Change? 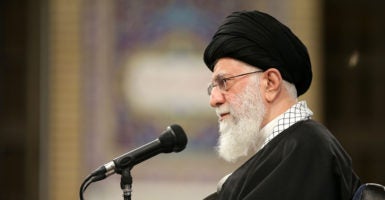 It’s fine for astrologers and bookmakers to make predictions, but there’s no absolute certainty about what the future holds. That’s true regarding matters of national security—and there the stakes are truly high.

Consider Iran. There is no more risky business than predicting when an authoritarian regime will collapse under the weight of its own putrefaction. Natan Sharansky has an excellent explanation of this phenomenon in his book “The Case for Democracy” (2004).

By their nature, he notes, these regimes are opaque. Their leaders hide the truth from the outside world, their own people—even from each other.

At the same time, they control every element of governance, civil society, the economy, the military, and the media. This makes it really hard to see the cracks that eventually lead to failure and collapse.

Moreover, there are no relief mechanisms that allow for accommodation, dissent, and change. When under assault from without and within, these regimes can roil with a furious boil until the pressure cooker explodes—a catastrophic failure that takes many by surprise.

How close the Tehran regime is to condition red is anybody’s guess. Today it faces the authoritarian’s worst nightmare: intense pressure from the outside and the inside.

Thuggish regimes excel at handling one or the other. When pressed from without, they rally the people and even use the external threat as a pretext for clamping down on dissent even more harshly. When threatened from within, they ruthlessly suppress opposition voices.

But when these regimes are hammered from both directions simultaneously, they struggle.

Today, Tehran is being jackhammered—and not just by the Trump administration. The foreign ministries of Germany, the United Kingdom, and France have joined in calling out the regime for non-compliance with the Iran nuclear deal and denouncing the regime’s actions as unacceptable.

Iran is on its way to more crippling “snap-back” sanctions.

Meanwhile, inside Iran, the natives are more than restless. Perhaps the most stunning clue of how times have changed from the revolution of 1979 is the stunning video of Iranian students streaming down the street, deliberately refusing to walk over images of the American and Israeli flags on the sidewalk.

Who would have thought we would have seen such a thing in our lifetimes? It may not be quite as startling as taking a sledgehammer to the Berlin Wall, but it is nonetheless stunning.

The protesters aren’t the only challenges the regime faces. Iran’s economy is bottoming out. Its surrogate military forces—bringing death and instability from Syria to Yemen, Iraq, and more—are now under assault themselves throughout the greater Middle East. And its supreme leader, Ali Khamenei, is no spring chicken.

No one expects the octogenarian ayatollah to hang on that much longer—and the smart money says a leadership struggle will follow his passing.

But this is not to say that freedom is just around the corner in Iran.

This is a tough bunch of mullahs. They have sustained the revolution for nearly a half-century and show no signs of letting up or losing control. They have doubled down on suppressing internal dissent and are as recalcitrant as ever in their stand-off with President Donald Trump.

Odds are the government won’t just collapse, nor will Iran turn overnight into a “normal” nation like Norway, as Secretary of State Mike Pompeo pines for.

The most likely scenario is the regime turns a little risk-averse, metering its foreign adventurism so it can focus on stabilizing its internal security. That is what the regime has done in the past when the revolution felt squeezed.

Still, there is no telling what steps or missteps Iran may take—and the U.S. shouldn’t try to guess. The consequences of guessing wrong could be really bad.

The best course now is for Trump to stick to his current strategy, for the simple reason that it is the one best calculated to safeguard U.S. interests.

The U.S. should not press for regime change. For one, it’s not clear that’s an achievable goal. For another, it is far from clear what would come after. There would likely be a whole new set of challenges.

If the Iranian people opt for regime change (and who could blame them?), that’s their business. The people of Iran have a perfect right to cry “freedom.” If they throw the mullahs out, we and the rest of the world will just have to deal with the aftermath.

If the regime hangs on, the mullahs will have to learn to live with being a pariah state, or they will have to take the bold choice of taking Pompeo’s advice and joining the family of responsible nations.