What’s Next in the Impeachment Process 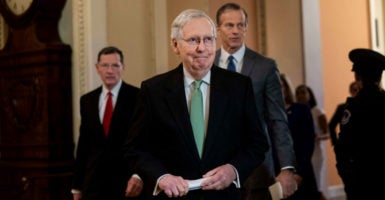 Heritage Foundation legal scholar Tom Jipping joins The Daily Signal Podcast to discuss the House’s impeachment process, and what’s next in the Senate. Read a lightly edited transcript, posted below, or listen to the podcast:

Jarrett Stepman: The big news of the day is, of course, impeachment. If all reports are correct, then by the time you’re hearing this show, the House will have voted to impeach President Donald Trump along partisan lines. This will make Trump the third president, a list that includes Andrew Johnson and Bill Clinton, to be impeached by the House of Representatives. Of course, no president has been convicted by the Senate and removed from office.

To break this all down for us is Tom Jipping, deputy director of the Edwin Meese Center for Legal and Judicial Studies and senior legal fellow at The Heritage Foundation. Thanks so much for joining us.

Thomas Jipping: Thanks for having me.

Stepman: So the first order of business here, let’s talk about the two charges that have been brought up as part of impeachment, abuse of power and obstruction of Congress. Can you break down what exactly those things mean?

Jipping: Sure. Those phrases are just labels and I’m not sure why Democrats drafted the articles that way because it kind of distracted people’s attention thinking that those phrases were somehow really significant.

But the two articles detail the actions that President Trump took that the House feels is an impeachable offense. The first one, abuse of power, is what we’ve been talking about for the last few months. The president pushing Ukraine to conduct a couple of investigations.

Democrats claim his purpose in doing so—and this is actually the first sentence of article one—was to solicit foreign interference in the 2020 presidential election. That’s the key fact.

In article one is the president’s purpose. The article refers to it as a corrupt purpose. Because pressuring a foreign government to do various things or conducting foreign policy even in the way President Trump does in a kind of unconventional way, that’s not impeachable. That’s simply a discretion that the president has. But what turns that into an impeachable offense, according to Democrats, is this corrupt purpose in trying to get Ukraine to, as one Democrat said, help him cheat in next year’s election.

The second article, which they call “obstruction of Congress,” had to do with events during the investigation into the first abuse of power situation. That is committees of Congress, particularly the Intelligence Committee, issued subpoenas, which would require the presence of certain executive branch officials, people like the president’s chief of staff, as well as the production of documents. President Trump refused to comply. They call that obstruction of Congress.

The problem with how they’re doing that article is that normally when the Congress would issue a subpoena—and they do that a lot, it’s an important investigative tool that committees have—and someone refuses to comply, the next step is for the committee to go to court and to get a court to rule whether that subpoena should be enforced.

Congress didn’t do that. I mean, the Intelligence Committee simply went from demanding that certain people show up and demanding certain documents to impeachable offense.

Stepman: Yeah. It’s interesting. Doesn’t that kind of imply that there is … I mean, we’re talking about the concept of separation of powers—

Jipping: That’s incredibly important. This isn’t just a matter of when Adam Schiff, the chairman of the House Intelligence Committee, says, “Jump,” Donald Trump is supposed to ask “How high?” or something. I mean, Congress doesn’t automatically get what it wants, especially when what it wants is from another branch of government.

That’s why you really do need to have a court evaluate the subpoena, evaluate whether there’s a justified refusal to comply. So that we know based on those legal principles, whether it’s legitimate and instead House Democrats basically said, “Because we didn’t get what we want, we’re going to impeach the president.”

Stepman: So talk about … after this impeachment vote, what the next step is going to be. What happens now that the House is going through with the impeachment? What can Americans expect now in the upcoming months?

The impeachment process is part of our Constitution to make it possible when absolutely necessary to remove a president for serious misconduct. It’s not simply House impeachment so that they can express their dissatisfaction with the president.

It’s supposed to be connected to the Senate trial and if the president is convicted by two-thirds of the Senate, then he’s removed from office. So that’s where it goes from here.

Once the House has impeached, they select a few members to be what are called impeachment managers. They play the role of the prosecutor. And then those managers physically go over to the Senate, they present the articles of impeachment, and very shortly thereafter, the Senate starts its trial. The Senate does have a separate set of impeachment trial rules that govern how that process takes place.

So that’s going to happen very quickly after the House chooses its managers and the managers present the articles to the Senate.

Stepman: So is there a specific way how that trial works or is this something that the Senate will decide ultimately once it gets into that body?

Jipping: The Senate impeachment trial rules answer some of those questions. Those rules assign a different authority to different parties. People who have watched “Law & Order” and have seen a criminal trial, you have the judge, the jury, and the prosecutor, and the defense lawyer, right? So the Senate is the judge and the jury, the House managers are the prosecutor, and then the president has his own lawyers to defend him.

Beyond that, it’s really up to the Senate to decide the specifics of how it’s going to kind of process things. Things like evidence questions and whether witnesses will be called things like this. As I said, the Constitution gives the power to try impeachments to the Senate. So the Senate has authority to decide how to conduct it.

Stepman: Absolutely. So I think one question that a lot of Americans [have is], especially as we’ve watched this whole thing unfold over a fairly long period of time, is there a time limit for how long this can carry on or is this something that could carry on indefinitely for the next year? Who knows how long?

Jipping: Well, there’s no time limit. In fact, the reason that the Senate established a set of impeachment trial rules [is because] there was actually an impeachment trial. This was of a federal judge back in the 1930s that took more than three months of the Senate’s time and it was conducted before the Senate. …

The rules say they can’t do anything else during that time. So it can take a very long time, which is very disruptive to the Senate, if it needs to. That’s one thing. I certainly don’t think that this trial needs to take an inordinate amount of time, but the Senate will decide that.

Stepman: So you’re saying that the Senate can’t work on anything else while this is happening? So if legislation is coming down the pipeline, everything goes on hold to conduct this trial?

Stepman: So one last question here and I think it’s interesting, of course, a lot of House Democrats saying officially … [Rep.] Ted Lieu saying that this will put a black mark on the Trump presidency, that that’s important to make the statement. What’s the difference here between what we see with this impeachment and say, for instance, censure, which Congress has done in the past? Is there a difference or are they becoming kind of muddled?

Jipping: That’s a very good question. You might remember Speaker Nancy Pelosi was reluctant in the beginning of this to jump onto the impeachment wagon, to go down that lane. I think what she had in mind was she would’ve preferred something like censure.

In other words, censure has nothing more than a resolution that just expresses the view of what the president did was terrible in some way, shape, or form and either House can do that anytime that it chooses. It can do it in any way it chooses.

Impeachment, which is provided specifically by the Constitution, is a much narrower lane to be in and limits the options that Congress has.

So, there’s probably members who are regretting having gone down this road, but they jumped on this bandwagon early. I think it was a grave mistake because I do think it’s misusing what the impeachment process was intended for. But here we are.

They could still do a censure resolution at any time they chose, they have the votes to do that. I think we really should get this finished so that way the Congress can get back to the people’s business.

Stepman: Well, very interesting. Thank you so much, Tom, for joining us on the show. I really appreciate it.

Jipping: Thanks for having me.