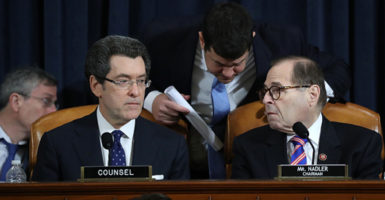 House Democrats spent at least $3 million of taxpayers’ money in under three months pursuing the impeachment of President Donald Trump, counting the cost of lawyers and staff time spent readying for hearings, according to Heritage Foundation research.

The $3.06 million price tag for taxpayers of the formal impeachment inquiry so far includes the salaries of 106 congressional employees who largely didn’t attend to normal duties from September through December.

It also includes the estimated hourly fees of six lawyers of record for witnesses who appeared during hearings, whether behind closed doors or public.

The total likely is a low estimate because it does not factor in overtime hours for U.S. Capitol Police when House hearings ran well into the late evening. The total also doesn’t include the cost of executive branch expenses, travel costs for witnesses, or supplies and materials.

The House Judiciary Committee voted Friday to approve two articles of impeachment against Trump, one accusing him of abusing his power and the other of obstructing Congress.

The first charge is based on Trump’s July 25 phone conversation with Ukrainian President Volodymyr Zelenskyy, in which Trump expressed concern that Ukraine, years before Zelenskyy took office, meddled in the 2016 presidential election in the United States.

The two leaders also talked briefly about Trump’s interest in Ukraine’s investigating the activities of former Vice President Joe Biden’s son as a highly paid board member of the Ukrainian energy company Burisma while the senior Biden was President Barack Obama’s point man for Ukraine policy.

The second charge is based on Trump’s direction that administration officials not respond to subpoenas from Congress in the impeachment investigation.

The two articles of impeachment went to the full House of Representatives for debate and a vote Wednesday. If a simple majority votes to impeach Trump, the matter would go to the Senate for a trial; it takes 67 senators, or a two-thirds vote, to convict and remove a president.

The cost estimate is based largely on the use of congressional staffers, rather than special prosecutors with staffers hired for the purpose of investigating potential crimes that could lead to impeachment.

In the impeachment of President Bill Clinton in 1998, most of the fact-finding occurred during then-independent counsel Ken Starr’s investigation.

For President Richard Nixon’s impeachment inquiry in 1974, most of the fact-finding occurred through either special prosecutor Archibald Cox or his successor, Leon Jaworski, as well as a Senate select committee, leaving the House Judiciary Committee to decide only the facts of the case.

Heritage’s cost analysis also includes the salaries of 106 congressional staffers who have worked on impeachment. They were mentioned directly in testimony or reports, or are likely to have been part of the proceedings based on job descriptions.

The analysis covers the period from Sept. 24, when House Speaker Nancy Pelosi, D-Calif., declared the House would conduct an impeachment inquiry, to Dec. 13, when the House Judiciary Committee approved the two articles of impeachment in two party-line votes.

The bulk of the fact-finding in the Trump impeachment investigation was done by the House Permanent Select Committee on Intelligence, chaired by Rep. Adam Schiff, D-Calif.

Neither Pelosi nor Schiff responded to The Daily Signal’s inquiries for this report.

A senior Trump administration official told The Daily Signal that House Democrats not only were wasting taxpayers’ time and millions of their dollars on a “sham impeachment,” but the “true cost” was choosing to undermine the will of voters rather than advance the interests of Americans.

The congressional staffers included in the analysis would have been paid regardless of the impeachment inquiry, but presumably for much different work.

However, given the vast amount of staffers’ time devoted to the inquiry, such as preparation for hearings—first behind closed doors, then publicly, before the Intelligence and Judiciary committees—as well as the amount of materials produced, the estimate includes their salaries over the life of the impeachment investigation.

Heritage’s analysis was drawn from impeachment-related documents on the involvement of staffers from the House Intelligence Committee, the Judiciary Committee and the Oversight and Reform Committee.

Berke and Eisen both have publicly advocated Trump’s impeachment since last year.

The Intelligence Committee hired Daniel Goldman, a lawyer who frequently appeared on MSNBC criticizing Trump before working for the committee. The committee also hired Daniel Noble, who had a significant reputation from his days as a prosecutor in the Southern District of New York.