Merriam-Webster’s Word of the Year, ‘They,’ Is Politically Correct Nonsense 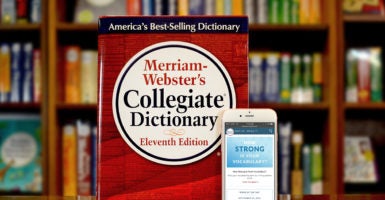 "Progressives are purposely hijacking language to advance a new vision of gender and of reality itself," writes Nicole Russell. (Photo: Joanne K. Watson/Merriam-Webster via Getty Images)

The Merriam-Webster dictionary—that reliable source for simple, straightforward linguistics—has released its 2019 Word of the Year, an annual trend since 2003. Only, I hate to break it to you, the word is “they.”

“They,” you say? As in, “They looked up the word ‘they’ in the Webster dictionary?”

No, not that kind of “they.” That’s just a plural pronoun. Webster specifies that this new “they” is being used to refer to a single person when the gender is unknown. It’s also used “to refer to one person whose gender identity is nonbinary.”

Webster added this definition to the word in September. After taking a poll of its online readers and witnessing a spike in online searches for the word—searches for “they” increased by 313% in 2019—Webster decided “they” should be the Word of the Year.

Wait, you mean words don’t have set meanings? I thought that was the purpose of a linguistic manual like Webster, to keep track of fixed meanings.

Alas, a new era has come: Words can be bent and reshaped, particularly for political purposes.

This new spin on the word “they” is just one example of a broader trend, which is the attempt to redefine all of reality by changing the language we use. Other examples of word doctoring aimed at gender neutrality include “Latinx” and “alumnx,” the politically correct term for college graduates.

All of this may sound progressive or enlightening, but forcing changes in language to reflect someone else’s views comes with real consequences.

What does it do to people, and to a culture, to say words now have definitions that have been completely fabricated out of thin air?

Words are centuries in the making. They carry the baggage of past cultural views, so those who want to drive culture in a new direction have to gut words of their historic meanings and reconstruct them to accord with the new, progressive reality.

The idea is to get people to think differently about the world by using words differently. As George Orwell wrote in his classic “1984”: “If thought corrupts language, language can also corrupt thought.”

It’s no secret that the LGBT movement has been at the forefront of trying to get us to think differently about sex, sexual orientation, and gender. So it’s not surprising that Webster points to an LGBT phenomenon to justify its decision.

Webster writes: “More recently, though, they has also been used to refer to one person whose gender identity is nonbinary.”

Webster says it is simply reflecting culture, since after all, “Singer Sam Smith announced in September that they now prefer they and them as their third person personal pronouns” and Rep. Pramila Jayapal, D-Wash., revealed that “her child is gender-nonconforming and uses they.”

These word lists have only recently begun to reflect PC capitulation. Many of the top words in years past marked some noteworthy historical event.

For example, in 2008, the Webster Word of the Year was “bailout.” If you remember 2008, you know why that makes perfect sense. In 2012, an election year, the words “socialism” and “capitalism” tied for first place for Word of the Year.

The words have become increasingly political, if not vague and fluid. Feminism, for instance, means many things to many different people, to the point that it’s become quite difficult to define.

The word “they” is also becoming politicized. But unlike feminism, “they” has a precise and commonly understood meaning, but is slowly being hijacked for a particular, progressive purpose.

Words only work because we all agree on what they mean. If we start using words in a new and foreign way, we cease to be able to communicate.

For Webster to use “they”to refer to someone whose gender is nonbinary, and to highlight it as the Word of the Year, is not only nonsensical. It is a capitulation to a cultural force that wants to change the way we think and live by altering our language.

Progressives are purposely hijacking language to advance a new vision of gender and of reality itself. So far, they’ve been successful in herding many others to join them in a linguistic revolution—including the Merriam-Webster dictionary.