Greta Thunberg Is the Perfect Hero for an Unserious Time 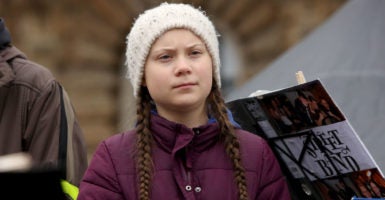 "Greta Thunberg"—the idea, not the girl—is a concoction of activists who have increasingly taken to using children as a shield from critical analysis or debate. Pictured: Thunberg demonstrates with high school students against global warming March 1, 2019, in Hamburg, Germany. (Photo: Adam Berry/Getty Images)

Who better than a finger-wagging teen bereft of accomplishment, or any comprehension of basic economics or history, to be Time magazine’s Person of the Year in 2019? Greta Thunberg’s canonization is a perfect expression of media activism in a deeply unserious time.

These days we celebrate vacuous fire and brimstone. “Greta Thunberg”—the idea, not the girl—is a concoction of activists who have increasingly taken to using children as a shield from critical analysis or debate. She’s the vessel of the environmentalist’s fraudulent apocalypticism-as-argument. Her style is emotion and indignation, histrionics and fantasy. She is a teenager, after all.

How dare you attack a poor defenseless child who suffers from Asperger syndrome!

You’ll notice that, on one hand, Thunberg’s champions demand that the world take her Malthusian crusade seriously, and on the other, they feign indignation when you actually do. The argument that young people, because they will inherit the future, are also best equipped to comprehend it is as puerile as any of Thunberg’s positions.

Perhaps a better question is this: What kind of parents, editors, producers, or U.N. officials would thrust a vulnerable child, with Asperger syndrome, no less, into a complex and contentious debate? I have great sympathy for her. It’s her ideological handlers who have stolen her childhood.

Surely, we should be allowed to consider the positions of Time magazine’s 2019 Person of the Year? Because the problem with Greta Thunberg—the idea, not the girl—is that she proposes not only that the people of her native Sweden abandon modernity but that billions of people in Asia and Africa remain in destitution. Thunberg, unlike many of her ideological allies, does not hide the truth of modern environmentalism. She believes that wealth and economic growth—modernity—are the problem.

Shamefully, radical environmentalists have convinced Thunberg and millions of others that the world is on the precipice of “mass extinction.” Even poor Prince Harry struggles to get out his Kensington Palace bed and start the day, so crushed is he by the weight of “eco-anxiety.” (You know, I have some ideas on how he might lower his carbon footprint.)

Like Joan of Arc, as Thunberg’s mother tells it, she experienced her first vision in her early teens, going months without eating properly. Thunberg, her heart rate and blood pressure indicating starvation, stopped talking to anyone but her parents and younger sister.

Rather than helping Thunberg overcome this irrational dread, her parents sacrificed her childhood to Gaia. Now, Thunberg is a child warrior, unrestrained by fact or reason, the human embodiment of years of fearmongering—in our schools, in culture, in our news—over progress, technology, and wealth.

Thunberg is merely repeating “unassailable science,” Time claims. “Oceans will rise. Cities will flood. Millions of people will suffer.” The unassailable truth is that climate deaths have plummeted dramatically and billions of people have been lifted from abject poverty by the system that Thunberg assails.

There is no “unassailable science” that tells us how the future looks: what technologies humans will devise, how they will adapt. One imagines a magazine such as Time, which once published pieces about now-discredited predictions of a “population bomb” and global cooling, might understand that the future is always more complicated than we imagine.

The reality is that Thunberg was bequeathed the healthiest, wealthiest, safest, and most peaceful world that humans have ever known. She is one of the luckiest people ever to have lived. And unlike most of her ancestors, she can continue to be a professional activist her entire life, thanks to market economies and emerging technological advances.

It’s been years, of course, since Time, or the magazine’s Person of the Year, mattered very much. The truth, though, is that Time did an admirable job of mapping out consequential people of the 20th century. Looking back now, I see a list populated by the men and women, nefarious and heroic, who helped shape the modern world. Sadly, Time has come a long way from “The Hungarian Freedom Fighter,” its choice for Man of the Year in 1957.

If we Americans lived in a more serious time, the Hong Kong freedom fighter, the men and women who risk their lives for liberty, would be Time’s Person of the Year. We don’t.