Climate Myths Perpetuated by the Alarmists 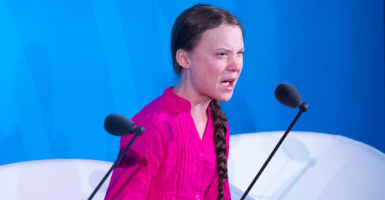 “How dare you? You have stolen my dreams and my childhood!” insisted teenage climate activist Greta Thunberg at the United Nations. “We are in the beginning of a mass extinction!”

Many people say that we’re destroying the Earth.

It all sounds so scary.

But I’ve been a consumer reporter for years, and I’ve covered so many scares: plague, famine, overpopulation, SARS, West Nile virus, bird flu, radiation from cellphones, flesh-eating bacteria, killer bees, etc. The list of terrible things that were going to get us is very long.

Yet we live longer than ever.

The Earth’s average temperature is rising. It’s risen 1.4 degrees Fahrenheit since 1880. The U.N. predicts it will rise another 2 to 5 degrees this century. If that happens, that will create problems.

But does that justify what’s being said?

“The world is going to end in 12 years if we don’t address climate change!” adds Rep. Alexandria Ocasio-Cortez, D-N.Y.

The Heartland Institute invited some climate alarmists to explain the “12 years” and other frightening statements they keep making.

The alarmists didn’t even show up. They never do. They make speeches and preach to gullible reporters, but they won’t debate anyone who is skeptical.

Over the years, I repeatedly invited Al Gore to come on my TV shows. His staff always said he was “too busy.”

At a Heartland Institute event I moderated, climatologist Pat Michaels put the 12-year claim in perspective by saying, “It’s warmed up around 1 degree Celsius since 1900, and life expectancy doubled in the industrialized democracies! Yet that temperature ticks up another half a degree and the entire system crashes? That’s the most absurd belief!”

Astrophysicist Willie Soon added, “It’s all about hand-waving, emotion, sending out kids in protest. It has nothing to do with the science.”

Is that true? I wish the alarmists would show up and debate.

Few serious people deny that the Earth has warmed and that sea levels are rising. But Michaels points out that even if the warming increases, humans can adjust.

For example, much of Holland is below sea level. “They said,” Michaels recounts, “we’re going to adapt to the fact that we’re a low-lying country; we’re going to build these dikes. Are you telling me that people in Miami are so dumb that they’re just going to sit there and drown?”

Climatology professor David Legates added a point the climate alarmists never make: “The water has been rising for approximately 20,000 years and probably will continue.”

“No, they aren’t!” responded Michaels. “You can take a look at all the hurricanes around the planet. We can see them since 1970, because we’ve got global satellite coverage. We can measure their power … There is no significant increase whatsoever—no relationship between hurricane activity and the surface temperature of the planet!”

Nevertheless, activists and politicians demand the United States move toward zero carbon emissions. That would “put you back in the Stone Age,” says Michaels.

Another myth is that carbon dioxide, the prime creator of greenhouse gases, threatens the food supply.

But carbon dioxide helps plants grow. “There are places on Earth where it is greening up like crazy,” says Michaels.

But if the crisis isn’t real, why do governments race to respond to it with regulations and big spending projects? Why is the U.N.’s Panel on Climate (IPCC) so alarmed?

Well, IPCC does stand for Intergovernmental Panel on Climate Change.

Legates says, “Governments want to keep control … Carbon dioxide becomes that molecule by which [they] can take control of your lives.”

Government is the real crisis.