What’s Really at Stake in the Chick-Fil-A Controversy 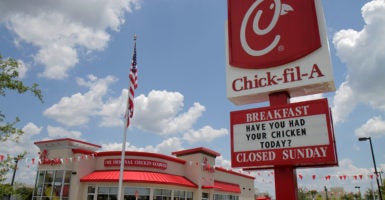 As Chick-fil-A is learning, there is no "enough" in the vocabulary of the high priests of progressivism. (Photo: Jeffrey Greenberg/Universal Images Group/Getty Images)

The angry backlash against their belief that marriage is between a man and a woman started on social media. Soon activists called for a boycott. Then officials banned them from selling in a key market. Faced with mounting social, economic, and legal attacks on their business, the company’s leadership was faced with an impossible decision: conscience or livelihood?

No, the scene was not the Georgia corporate headquarters of Chick-fil-A, America’s third-largest fast food chain. It was the home of Steve and Bridget Tennes, a Catholic family who run Country Mill Farms in Michigan.

A Facebook discussion about their beliefs on marriage led LGBT activists to call for boycotts. The East Lansing City Council declared that their beliefs themselves constituted discrimination and banned them from selling their apples at the farmer’s market.

The controversy over Chick-fil-A’s decision to end financial giving to the Salvation Army and Fellowship of Christian Athletes has spotlighted the conundrum faced by people nationwide whose values don’t line up with progressives’ new orthodoxy.

We can make too little and too much out of this incident. One way to underestimate it is to think it only happens on Wall Street. It’s happening as much on Main Street, with more dire economic consequences for smaller businesses and for individuals.

Another mistake would be to assume this is a one-off in a “culture war” from which businesses can simply choose to drop out. Chick-fil-A didn’t start the war over marriage, and it won’t be able to simply drop out. Instead, LGBT activists are forcing it to pick sides.

The attacks on Country Mill Farms and Chick-fil-A follow a pattern. Four types of attack lead to freedom’s decline. It starts with social ostracization, then economic discrimination, then legal punishment (including criminal penalties), and often ends in violence, either by the state or the mob.

We pay attention to these attacks overseas in their final stages, but often miss how gradual the decline of freedom is and fail to recognize them in our own country.

In 2012, when Chick-fil-A CEO Dan Cathy said he believes what billions of Jews, Christians, and Muslims around the world believe about marriage, LGBT activists swiftly attacked in the media and launched boycotts that have become international. Officials sought to ban the restaurant from selling in airports, college campuses, and metropolitan centers.

When the Family Research Council supported Cathy’s stance on marriage, a vigilante set out to assassinate its employees simply because they disagree on marriage. A security guard foiled the plan, but not before taking a bullet himself. Chick-fil-A’s story includes all four types of attack.

Worldwide, the forces who seek to impose orthodoxy follow the same playbook. There is one right belief which is sacred. Everyone must conform. Dissenters must be punished.

And as Chick-fil-A is learning, there is no “enough” in the vocabulary of the high priests of progressivism. After it announced the end of its support for the Salvation Army and Fellowship of Christian Athletes, an LGBT group, GLAAD, said the company should next “unequivocally speak out against the anti-LGBTQ reputation that their brand represents.” Others said the company should “make amends for past statements and deeds” by donating to pro-LGBT groups. Reparations, anyone?

The cornerstone of the LGBT movement’s legal strategy is to convince people that mere disagreement on marriage and biological sex is anti-LGBT discrimination, even though it’s no such thing. Tim Gill, the multimillionaire whom Rolling Stone calls the “megadonor behind the LGBTQ rights movement,” has bragged that these laws will be used to “punish the wicked.”

Here is where we could make too much out of this story. Chick-fil-A leadership’s reported decision to disavow charities that align with values that the company once espoused has demoralized many. And millions are still hoping the company will issue a clear statement of support for the deserving charities that progressives have sought to demonize.

But ultimately, the future of freedom won’t only be determined in corporate boardrooms. It will be determined by whether the American people and their representatives can rightly distinguish between disagreement and discrimination.

Firefighters, pilots, entertainers, and tech CEOs have lost jobs, promotions, and access to markets because they refused to go along with the new orthodoxy. The Tennes family chose to fight and are four years into litigation against the city of East Lansing.

The future of freedom depends on whether we can live with difference and respect the consciences of all in the marketplace. If not, we risk seeing things get even uglier.