No, AOC, Dogs Don’t Have More Time With Their Children Than Women 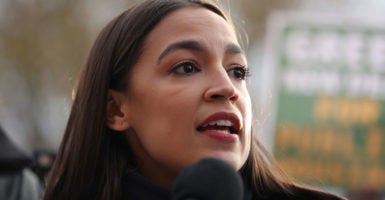 At a hearing, Rep. Alexandria Ocasio-Cortez, pictured at an event in November, said the government should require at least eight weeks of paid maternity leave because puppies get eight weeks with their dog mothers.(Photo: Chip Somodevilla/Getty Images)

As a woman who gave birth to six children and is raising them, I find being compared to a breeding dog incredibly offensive.

Earlier this week at a hearing held by the House Oversight and Reform Committee, Rep. Alexandria Ocasio-Cortez, D-N.Y., said the government should require at least eight weeks of paid maternity leave because puppies get eight weeks with their dog mothers.

I hope that before Ocasio-Cortez uses this comparison again, she will consider how insulting it is.

It’s also a terrible comparison, considering that puppies are taken from their mothers and sold after eight weeks (most states require an eight-week period for vaccination purposes). These puppies also never get to meet their fathers.

But let’s consider the more serious matter of how we can help families who don’t have access to paid family leave.

In the hearing, Ocasio-Cortez presented misleading data, failed to recognize basic economic principles, and ignored the evidence of government-provided paid family leave programs across the world.

>>> Problematic Women: Why Government-Funded Maternity Leave Is Not the Answer

Most workers who take paid family leave do not use a formal paid family leave policy, but rather a combination of vacation, sick leave, and other paid time off. In addition, 47% of full-time private-sector workers have access to employer-provided short-term disability insurance policies covering maternity leave and their own medical leave.

Then, there are the basic economics of paid family leave.

The Market Is Providing What Workers Want

Workers want paid family leave. Employers want to be able to provide it because it helps them attract employees and keep them on board.

A strong economy and tight labor market are doing more for workers than any government paid family leave program ever could. With more job openings than there are workers available to fill them, employers have to compete to attract and retain the workers they need by offering higher wages and more benefits.

And when employers can keep more of the money they earn and don’t have to waste resources on costly and unhelpful regulations, they can devote more resources to the pay and benefits workers want.

Finally, when workers have higher wage growth and can keep more of the money they earn, they are better able to afford taking leave from work.

That’s why the combination of the Tax Cuts and Jobs Act and fewer unnecessary regulations have been so helpful in improving workers’ ability to take paid leave. The tax cuts put $1,400 per year back into the typical American household’s pocketbook, spurred companies to provide more paid family leave, produced wage gains of about $1,500 last year for workers making less than $25,000, and lowered the unemployment rate to a 50-year record low.

But despite all the benefits of paid family leave, we cannot ignore that it has costs and consequences. A government-run paid family leave program cannot erase those costs—it can only redistribute them.

The FAMILY Act, which members like Ocasio-Cortez are proposing, purports that it would only cost workers a cup of coffee a week, but it would end up costing a tank of gas instead.

As structured, the bill could provide 12 weeks of paid leave to only a fraction of workers who want to take it.

It’s simple math: If you collect $200 in taxes from the typical worker and provide an average benefit of $7,600 over 12 weeks, then fewer than 3% of workers can take leave in a given year.

But about 16% of workers take leave. That leaves a big gap between who wants to take leave and who would be able to take it.

Unless the government implements a rationed paid family leave policy, it will have to collect drastically more in taxes than it claims—closer to $1,500 for the average worker.

Those costs would hurt low-income workers the most.

And this is the third point Ocasio-Cortez failed to recognize.

Redistributing From the Poor to the Rich

Across the world, government-run paid family leave policies are regressive, taxing everyone and redistributing that money away from low-income earners to middle- and upper-income ones.

There are a number of reasons for that, including low awareness among lower-income earners, and the fact that partial government benefits just aren’t enough—someone making $600 a week ($15/hour) can’t get by on a $396 government-provided paid family leave check.

And attempts to reverse these failures have failed. San Francisco enacted 100% benefits for many workers, and still, low-income mothers were only half as likely to receive government-provided benefits as high-income mothers.

Moreover, a recent economic analysis of California’s program found that it reduced women’s employment and earnings, as well as their fertility rates. And European-sized policies have hurt women’s career prospects and their wages.

Well-intended policies like these too often produce negative results.

Policymakers should work to increase access to paid family leave through policies that help employers have the resources to provide these benefits, and that give workers more income and flexibility to choose what is best for them.

The last thing our country needs is another unaffordable and poorly targeted national entitlement program that fails to meet the real needs of workers.