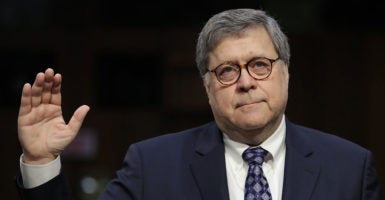 Four Republicans lawmakers are calling on Attorney General William Barr to enforce federal anti-obscenity laws and to crack down on hardcore pornography.

Reps. Mark Meadows of North Carolina, Brian Babin of Texas, Vicky Hartzler of Missouri, and Jim Banks of Indiana sent a letter to Barr, urging him to enforce anti-obscenity laws that they say were ignored during President Barack Obama’s administration. National Review first reported the letter.

“ … U.S. laws prohibit distribution of obscene pornography on the Internet, on cable/satellite TV, in hotels/motels, by retail or wholesale establishments, and by common carrier,” the lawmakers wrote. “Yet the enforcement of obscenity laws was stopped by the Obama administration when Attorney General Eric Holder disbanded the Obscenity Prosecution Task Force in the Criminal Division.”

“This pledge has so far been ignored in the Trump administration, with the result that the harms of illegal pornography have continued unabated, affecting children and adults so acutely to the point that 15 state legislatures have declared that pornography is causing a public health crisis,” the letter reads.

Meadows, Babin, Hartzler, and Banks urged Barr to “declare the prosecution of obscene pornography a criminal justice priority,” and asked him to have U.S. attorneys “bring prosecutions against the major producers and distributors of such material.”

On Friday, Banks tweeted about the importance of addressing the scourge of pornography in American society.

“The prevalence of obscene pornography in our society has consequences, especially for our children,” Banks tweeted, adding:

It’s time we start talking about it & it’s time to do something about it. I’m proud to introduce a letter calling on AG Barr to prosecute obscenity & make it a DOJ priority. …

Our children are being exposed, often accidentally, & are struggling with addiction. This is beyond outrageous. It is evil.

In a statement provided to The Daily Signal, Barr’s office said, “We have received and are reviewing the letter.”