Was It Terrorism in Pensacola? What We Know, and What’s Next 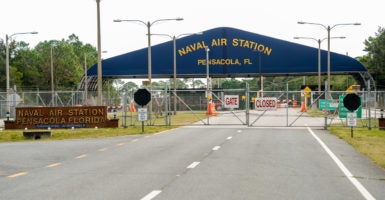 A general view of the atmosphere at the Pensacola Naval Air Station following a shooting on Dec. 6 in Pensacola, Florida. The shooting has left three innocent people dead and eight people wounded. (Photo: Josh Brasted/Getty Images)

Family members are grieving after a shooter killed three Navy servicemen at a Pensacola, Florida, Navy base. Details are just starting to emerge about the shooter, 2nd Lt. Mohammed Saeed Alshamrani, a Saudi Arabian air force pilot training in the U.S. Heritage Foundation scholar Cully Stimson discusses possible motives and the FBI investigation. Read the lightly edited interview, pasted below, or listen on the podcast:

Daniel Davis: Joining me now to discuss the recent shooting at a naval base in Florida is Cully Stimson, a senior legal fellow at The Heritage Foundation and a veteran who served in the Navy for 27 years. Cully, thanks for your time today.

Davis: Last Friday, a Saudi airman shot up a U.S. Navy base in Pensacola and killed three people. What do we know so far about the suspect and a possible motive?

Stimson: No. 1, he’s dead. No. 2, he was part of an international coalition of people who we routinely have in our military bases across all the services. He was attending with other Saudi pilots basic pilot training at Pensacola, which is the heart and soul of naval aviation in the United States Navy.

Davis: Any early indications of a potential motive?

Stimson: It’s a little too early to tell. The FBI has the con here, and having worked as a former federal prosecutor, I can tell you the FBI’s very thorough and they’re not going to get out in front of the facts.

But from what has been publicly reported so far, we know that this young lieutenant went back and forth to home, as all international and domestic students do during breaks; that he had been a student for a while in this basic aviation course; that there had been a report of a complaint he had filed against one of his instructors because in the naval aviation community, they’re sort of bawdy and they come up with nicknames for people.

When you saw “Top Gun,” for example, you saw one of the pilots was named Goose and another guy was named Mustang. One of the instructors allegedly had given him a nickname, which he didn’t find acceptable, so he filed a complaint against the instructor.

Months went by, during that time after he filed the complaint, but nothing had happened, he had gone back to Saudi Arabia, as I’m sure many of his colleagues had, and then he came back to the United States for training. Then he got a 9 mm pistol and shot up students in the basic training course classroom.

Davis: Should this be considered an act of terrorism?

Stimson: It should if the facts show that there was a connection to terrorism, and right now, the facts don’t show that. What the facts show is that a person who is a Saudi got a gun and killed people and he was killed as a result of it by the Escambia police department or somebody in law enforcement.

… The allegations are that he had written some things on social media which were anti-American. That doesn’t necessarily mean it’s connected to terrorism.

There’s also an allegation that he had said something positive about Osama bin Laden. I can’t imagine anything positive anyone would want to say about that person who’s, fortunately, dead. Maybe he was motivated by some jihadi tendencies, but I think it’s really important that when we have an incident like this, No. 1, we express our condolences to the people who died. Their lives and their family’s lives will never be the same, obviously.

Secondly, it’s important not to jump to conclusions, that because he’s a foreign national and because he’s serving with our military and because he says stupid things on the internet that he’s a terrorist. We need to reserve that label for people who are terrorists, who are motivated by, directed by, inspired by other terrorists, and then who commit terrorist acts.

Now, if he is, and that’s what the facts show, then we can label this an act of terrorism. He’s a murderer and he’s a heinous, despicable individual who’s, fortunately, dead, but that’s all we know right now.

Davis: Yeah. You mentioned those victims, and the three victims actually charged the shooter, right? They weren’t running away. They were actually shot, and one of them ran out and gave critical details to the sheriff who ended up taking out the shooter. Definitely heroism on display.

Stimson: Yeah. I will tell you, as a Navy captain who still serves in the reserves, of course I’m speaking as a Heritage scholar and not on behalf of the Department of the Navy, the CO of the base down there who gave a long and very eloquent press conference was so impressive.

He said not only the right things, that we’re going to care for our families, it’s going to take a long time, but he really exemplified the type of leadership that we should all be proud of for men and women in our uniform. He rose to the occasion.

Obviously, it was difficult for him, but in the days and weeks to come, the FBI will work closely with the military authorities to figure out why this happened. Then the harder part, which is, is there anything that we can do to prevent something like this in the future?

Now, for example, I know people have said, “We shouldn’t have military people from other countries training with our people.” That’s just ignorant, frankly.

We’ve been training with our allies, military officers and enlisted, for decades. We need to do that, one, because it makes us stronger when we fight in coalitions; two, because mil-to-mil relationships really matter; and three, our main adversaries, the Russians and the Chinese, don’t do that. They don’t have the type of open, welcoming type of professional military relationships that we have established with dozens of countries, and we need to continue to do that.

Davis: Does this suggest an intelligence failure in some way? Any warning signs that should have been picked up on?

They live out in town, like this young man did, along with all the other young patriotic men and women who were attending flight school. They lived in apartments just like anyone else. The government’s not monitoring what you’re doing in your apartment out in town, nor should they. They don’t have the legal right to do that.

Whether there were warning signs that we missed, it’s too early to tell, but I can be darn sure that and feel quite confident that the FBI will look into that.

I’m quite confident that the Heritage’s former chief of staff, Mark Esper, who’s the secretary of defense, based on what he said in the Sunday talk shows, will do a thorough top-to-bottom scrub to see whether we missed anything and whether any vetting protocols that we have in place are sufficient or need to be tweaked.

Davis: Yeah. What should the FBI’s key focus in this case be?

Stimson: Why it happened, and can it be prevented from happening again?

Davis: There’s been some talk about the gun law that allowed this shooter to actually get a gun legally. There’s only a handful of circumstances where a foreign national is legally allowed to purchase a firearm on U.S. soil. The governor down in Florida, Ron DeSantis, a Republican, is saying he wants to close that loophole with a new gun law. Your thoughts on that?

Stimson: Ron DeSantis is an impressive governor. He has a very high approval rating. He happens also to have been a great Navy JAG reservist and a colleague of mine. I leave it to the governor as the head of a sovereign state to decide whether or not the state laws that would allow for this to happen happen.

Davis: Cully, I want to leave it by doing what you mentioned earlier, which is honoring those who passed. Adam Watson, who’s the brother of one of those who deceased, posted this. He said:

Today has been the worst day of my life. Joshua Kaleb Watson saved countless lives today with his own. After being shot multiple times, he made it outside and told the first response team where the shooter was. Those details were invaluable. We are beyond proud, but there is a hole in our hearts that can never be filled.

Cully Stimson, thanks for coming in.

Stimson: God bless that young man and his family, and let’s hope we get to the bottom of this. Thanks for having me.