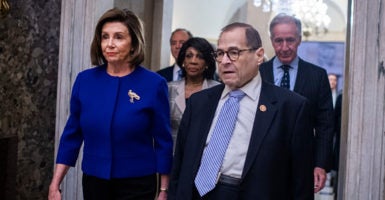 But on Tuesday, the charge House Democrats came up with was a broad “abuse of power” claim, alleging that Trump solicited foreign interference in the 2020 election.

The second and last charge against the president is “obstruction of Congress,” for not complying with congressional subpoenas in the impeachment probe.

“This is what they have,” Ray told The Daily Signal, referring to Democrats’ announcement of the two charges they will pursue. “It was broadened to abuse of power, which would seem to have a lower burden of proof.”

Ray was part of independent counsel Ken Starr’s team, which sent the report to Congress in 1998 recommending Clinton’s impeachment on charges that included perjury and obstruction of justice. Ray completed the long-running investigation after Starr stepped away from the post.

Ray acknowledged that impeachment is both a political and legal process, recalling the often-quoted Gerald Ford standard when, as House Republican leader, Ford sought to impeach Supreme Court Justice William O. Douglas in 1970.

“An impeachable offense is whatever a majority of the House of Representatives considers it to be at a given moment in history,” Ford, a future president, asserted at the time. “Conviction results from whatever offense or offenses two-thirds of the other body [the Senate] considers to be sufficiently serious to require removal of the accused from office.”

But that is not in the tradition of impeachment at the presidential level, Ray contends.

“I remain of the view that a well-founded impeachment must [involve] a crime,” Ray said, adding: “Obstruction of Congress does not constitute a crime unless it constitutes obstruction of justice.”

The impeachment article on obstructing Congress by not complying with congressional subpoenas raises questions related to the separation of powers established in the Constitution, legal experts said.

“The executive branch is not required to do what the legislative branch orders it to do,” Thomas Jipping, a former chief counsel for the Senate Judiciary Committee who helped oversee two impeachment trials of federal judges, told The Daily Signal.

“When Adam Schiff says ‘jump,’ Donald Trump is not required to say ‘how high,’” said Jipping, referring to the California Democrat, point man on impeachment as chairman of the House Permanent Select Committee on Intelligence. “There are real boundaries between branches of government.”

Not only is the article of impeachment on abuse of power lacking a finite crime, Jipping noted, the article is based largely on intent.

Trump, the article alleges, “solicited the interference of a foreign government, Ukraine, in the 2020 United States presidential election.”

“It’s about proving intent. This would be the first impeachment in history based on intentions,” said Jipping, now deputy director of the Meese Center for Legal and Judicial Studies at The Heritage Foundation. “The view is Trump pressured or coerced and demanded action for the purpose of getting reelected. That is at the heart of the whole impeachment case.”

“Our president holds the ultimate public trust. When he betrays that trust, and puts himself before country, he endangers the Constitution, he endangers our democracy, and he endangers our national security,” Nadler said in a formal statement. “The Framers prescribed a clear remedy for presidents who violate their oath of office. That is the power of impeachment.”

One former Justice Department lawyer, J. Christian Adams, summarized the abuse-of-power article as translating to “We don’t like Trump.”

The second article on obstructing Congress, Adams said, means “Trump didn’t do what we told him to do.”

“If that’s what the Democrats have, they are in trouble,” Adams, now president of the Public Interest Legal Foundation, told The Daily Signal.

Adams noted that President Barack Obama took executive actions without Congress and withheld documents from Congress during the Fast and Furious gun-running scandal—so he could be accused credibly of both offenses if a Republican-controlled House had been inclined to do so.

“It boils down to this: Policy and ideological disagreements are not impeachable offenses,” Adams said.

The articles of impeachment against Clinton—perjury and obstruction of justice in connection with covering up an affair with a White House intern—were specific.

The two articles against Trump are similar to those contemplated against President Richard Nixon for the Watergate cover-up before he resigned: obstruction of justice, obstruction of Congress, and abuse of power.

But each of those articles cited specific conduct by Nixon that was criminal in nature.