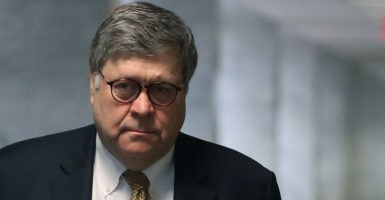 The report “now makes clear that the FBI launched an intrusive investigation of a U.S. presidential campaign on the thinnest of suspicions that, in my view, were insufficient to justify the steps taken," says Attorney General William Barr, pictured in January on Capitol Hill. (Photo: Mark Wilson/Getty Images)

The Justice Department’s Office of the Inspector General found “significant inaccuracies” in the FBI’s applications for warrants to conduct surveillance against a Trump campaign adviser, according to a report released Monday.

Michael Horowitz, the inspector general, said that the FBI’s decision to open investigations against Trump campaign advisers in July 2016, as well as to apply for Foreign Intelligence Surveillance Act (FISA) warrants against Carter Page, were permitted under FBI guidelines. The report also dispels some of the more aggressive conspiracy theories about the FBI’s investigation of Trump associates.

But the report is highly critical of the FBI’s handling of information from Christopher Steele, the former British spy whose dossier the FBI used in applications for FISA warrants against Page.

“[T]he FBI obtained additional information raising significant questions about the reliability of the Steele election reporting, the FBI failed to reassess the Steele reporting relied upon in the FISA applications.”

The inspector general also found that FBI investigators failed to disclose information that “was inconsistent with, or undercut, the assertions contained in the FISA applications.” The omissions “resulted in inaccurate information being included in the applications,” the report says.

The report also reveals that the FBI and Justice Department’s lawyers rejected an initial effort from FBI investigators to apply for FISA warrants against Page because they believed there was not probable cause to believe that he was a Russian agent. But the FBI revisited the FISA applications after portions of Steele’s dossier made their way to FBI investigators on Sept. 19, 2016.

That finding seemingly undercuts some former FBI officials’ attempts to downplay the dossier’s significance to the FISA applications.

Attorney General William Barr issued a statement shortly before the release of the report, saying the report “now makes clear that the FBI launched an intrusive investigation of a U.S. presidential campaign on the thinnest of suspicions that, in my view, were insufficient to justify the steps taken.”

FBI officials relied on information from Steele, a former British spy who worked for Democrats, as part of the FISA applications against Page. The bureau alleged there was probable cause to believe Page was working as an agent of Russia.

The special counsel’s report severely undermined those conspiracy theories. It said there was no evidence that Trump associates conspired with Russia, or that any served as Russian agents.

Republicans have asserted the FBI misled FISA judges by relying on Steele’s unverified allegations about Page.