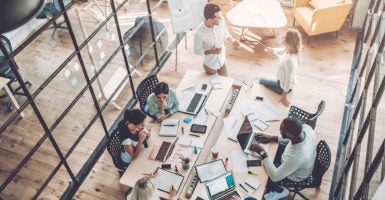 The U.S. economy added 266,000 jobs in November, while the unemployment rate dropped to 3.5%, according to Department of Labor data released Friday.

The 266,000 jobs added in November, according to the Bureau of Labor Statistics report, amounted to about 138,000 more jobs than were added in October. The surge comes after a 40-day General Motors strike, “reflecting the return of workers,” according to the report, adding 41,300 to automaker payrolls.

Economists had predicted that 187,000 jobs would be added and that the unemployment rate would remain at 3.6%, according to The Wall Street Journal.

“Along with the upward revisions to earlier months, these numbers are telling us that job growth in the U.S. has stabilized,” Coulton told Yahoo Finance. “This highlights that conditions remain firmly in place for the consumer and the service sector to cushion the economy from external risks and related weakness in U.S. manufacturing.”

Job growth has come back strong since February, when just 33,000 jobs were added.

The unemployment rate has held steady between 4% and 3.7% for more than a year before the April jobs report showed its drop to 3.6%. Prior to April’s report, the consistent unemployment rate suggested that workers were jumping back into the workforce to fill open jobs, rather than the workers who are currently collecting unemployment welfare, according to the Journal.