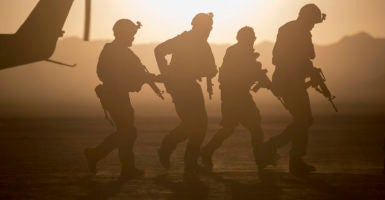 Our troops aren't the world's policemen, but they are looking after our interests around the world. (Photo: Stock/Getty Images)

“Thank you for your service.” Our troops hear that often from their fellow Americans, and not just during the holidays. Well, our gratitude can go even deeper. We also can be thankful that our military isn’t fighting “endless wars.”

Calls for “no more endless wars” may be catchy, but they’re a bumper-stick excuse for a serious foreign policy.

Sure, there are many intractable conflicts around the world. But that’s not what defines America’s military deployments. And if President Donald Trump’s critics could look at the facts on the ground, free from political bias, they would see that his administration has done an excellent job aligning America’s global footprint with U.S. national interests.

The White House has drawn the most criticism for its operations in Syria, which without question will remain a fractured country plagued with instability and conflict for years to come.

This, simply put, is not our war. That didn’t stop critics from assailing the president. Nor did they retract their criticism when it became clear that while we aren’t planning on being a party to the conflict, we aren’t walking away from our responsibility, either.

The U.S. is adjusting its presence to continue the fight against the Islamic State, also known as ISIS, and positively contribute to minimizing conflict that affects friends and allies. What the president is doing throughout the Middle East is transitioning to a more sustainable posture, one that equitably shares the burdens while keeping the pressure on ISIS and Iran, the chief destabilizing threats in the region.

In a similar manner, the U.S. is still in Afghanistan. But we aren’t fighting a war. We are, along with our NATO allies, providing advice and support to the Afghan people, who are defending themselves.

Afghans don’t want to live under the oppression of the Taliban. Supporting them is not only a noble mission, it serves U.S interests. If the Taliban overran Afghanistan again, we would be right back to the dangerous conditions we faced on 9/11.

In Western Europe, this administration actually has increased America’s military might—not to fight a war, but to deter a future one. And it’s hard to argue with success. Under Trump’s watch, not one more inch of European soil has fallen into Russian President Vladimir Putin’s grasp. That’s a record that can’t be matched by the past two presidents.

In Asia, China is undergoing an unprecedented military expansion. No one outside Beijing thinks that’s going to make the world a safer place. There’s no question that the U.S., in concert with its allies, needs to step up and counter this expansion.

That’s far from warmongering. Support for the effort is also truly bipartisan, recognizing America has to do more to ensure its future as an Indo-Pacific power.

Our troops aren’t the world’s policemen, but they are looking after our interests around the world. They are part of America’s most important export, a force for peace and stability.

So as we remember our troops this holiday season—as they often experience about as much comfort as the exhausted, ragged Continental Army did when heading for its winter camp in Valley Forge—let’s remember exactly why we should be grateful.