When She Came Out as a ‘Boy,’ Therapists Silenced Her Mother 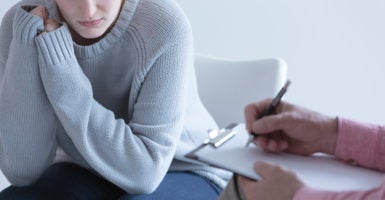 Her mother was told she would not be able to understand her daughter's transition because she was "cis." (Photo: KatarzynaBialasiewicz/Getty Images)

Douglas Murray is associate editor of The Spectator and the author of several books, including "The Madness of Crowds: Gender, Race and Identity."

This is the experience of just one American parent whose family has had to navigate the trans journey in recent years.

To protect the identity of the child I will be deliberately vague about locations and some specifics. But the family was living in one of the big cities of America and have only fairly recently moved to a more rural location. This is where they are when I speak with the child’s mother, who I will call Sarah.

Sarah is, in every way, an average middle-class mom. She cares for her children and her husband works to support them. She describes her politics as “slightly left of center.” Four years ago, at the age of 13, her daughter announced that she was trans and that she was actually a boy.

The daughter had already been diagnosed with a mild form of autism, and had had trouble being accepted by some of her peers. She had trouble picking up on conversational signals. Invitations to play weren’t reciprocated, and her fashion choices weren’t deemed quite right by all of her peers.

In time Sarah’s daughter found that boys in her school were slightly more amenable to her than girls. But even then she couldn’t quite get the degree of social acceptance which she wanted.

Then one day she announced to her mother that she was in fact a boy and that this was the cause of her problems.

Sarah asked her what had given her the idea that she was trans. After all, for her family it had all seemed to come on very suddenly. Her daughter said that she had got the idea after a presentation at her school.

At this point it emerged that around 5% of the children at her daughter’s school now identified as transgender. They included a remarkably similar range of children, including children who had been diagnosed as having forms of autism and a history of being unpopular or poor at connecting with their peers.

Her mother would not be able to understand this, because she was “cis.”

Of course her mother wanted to know more. If there had not been any other children at her school who identified as trans, would she have decided that she was a boy? Sarah’s daughter said that no, she wouldn’t have done so because she “wouldn’t have known that it was an option.”

Sarah had never heard the word “cis” before, let alone been described as it. Sarah’s daughter repeatedly told her mother that “trans children know who they are.”

But Sarah was supportive. She agreed to call her daughter by her new, preferred, male name and began to address her using male pronouns. She even introduced her daughter to her friends as her son.

>>> I Spent a Year as a Trans Man. Doctors Failed Me at Every Turn.

Trying to be as supportive as possible, mother and daughter even went on a “trans pride” march together and danced along to Lady Gaga’s “Born This Way.”

Sarah was so supportive that she bought the first binder her daughter needed to conceal her developing breasts. It is hard to see what more a mother could have done.

At the same time, quite understandably, Sarah started to read up online about the whole trans business. It was new to her family’s life and she wanted to get a range of views in order to arrive at some understanding of her own.

The clinician told her that “parental acceptance was the first step to prevent suicide.”

By Sarah’s own admission, her first impressions of the online debate were not good. A lot of the critical reading online was, she thought, marked by a strain of “anti-LGBT” sentiment. The people who wrote about it often seemed to be what she describes as “bigoted or religious.”

She had never explored any of this deeply before. She was “just concerned about my daughter.” And so Sarah went to speak to some professionals—starting with some gender clinicians.

The first of these told her something which echoes what many other people in her position have heard. The clinician told her that “parental acceptance was the first step to prevent suicide.”

As with any parent, this was a threat of the worst nightmare imaginable. The doctor clinician also told Sarah that since her daughter had been “insistent, persistent, and consistent” in her claims this meant that her daughter was indeed a boy.

Sarah was not only worried by the words of the professionals but also by some of what her daughter was saying. Whenever Sarah’s daughter described her feelings of gender dysphoria her mother noticed that the words seemed “rather scripted.”

And to say that the script was manipulative is an understatement. At one stage her daughter issued a list of demands which included blackmail and threats unless these demands were met.

Sarah’s daughter was 13 and a half when she announced that she was trans. At 14 and a half she went to the therapist. And at 15 she was told that she should start taking the puberty blocker Lupron.

At each stage it was stressed that it was “insulting” for the mother to question the feelings of her daughter and that as with trans people so with autistic people.

At each stage it was stressed that it was “insulting” for the mother to question the feelings of her daughter.

“Autistic people know who they are,” she was reassured. Even to question this was to be “able-ist.” A number of different therapists were approached and eventually mother and child returned to the first one.

And so at 17 and a half Sarah’s daughter announced that she wanted to transition.

Of course Sarah asked her daughter about whether she really wanted to do this. She stressed the irreversibility of the path down which her daughter was going.

Even more irreversible than the hormones was the irreversibility of transitioning. What if—Sarah asked her daughter—after choosing to transition she then felt the need to de-transition? What if having made this change she decided she didn’t want it?

Her daughter’s response was, “So. I’ll kill myself.”

While no parent should ever take such a threat lightly there does seem to be a pattern to it, as Germaine Greer had claimed much earlier. And not only from the young people, but from some of the medical professionals who are pushing their case.

For instance, in 2015 Michelle Forcier, MD, professor at Brown University Medical School and director of Gender and Sexual Health Services at the Lifespan Physician Group in Providence, Rhode Island, was interviewed on NBC.

Asked about whether children as young as 3 or 4 could possibly know what they want, Forcier replied, “To say 3- and 4-year-olds don’t understand gender doesn’t give our kids a lot of credit.”

When asked what harm could be done by waiting before transitioning she said, “The biggest harm is not to do anything.”

But what was the risk of waiting, she was asked.

>>> ‘We Are Manufacturing Transgender Kids,’ Says Man Who Once Identified as Woman

Joel Baum, who is senior director at the campaign group Gender Spectrum, has put this even more starkly. To parents worried about consenting to their children going on hormones he has said, “You can either have grandchildren or not have a kid any more, either because they’ve ended the relationship with you or in some cases because they have chosen a more dangerous path for themselves.”

The problem with the choice being presented this way—in the most catastrophizing light possible—is that it leaves no room for discussion or dissent.

Instead, the moment that a child says they think they may be of the opposite sex, they must be greeted only with acceptance and from then on only with a set of life-changing steps which an increasing trans body of professionals appear to want to encourage with as little pushback as possible.

Yet stories like James’s and also that of Sarah’s daughter are filled with suggestive turns. Just as James says he might never have considered trying to become a woman if he hadn’t been in a milieu in which drag and trans were common, so Sarah’s daughter admits that she might never have considered the possibility that she was actually a boy if there had not been other pupils at the same school who were making the same claims.

All of which brings us to the crux of the issue.

In the U.S. there is not merely a movement but a business incentive for pushing this.

Even if there are some people who actually suffer from gender dysphoria, and even if for some of them life-changing surgery is the best possible option, how might they be differentiated from people who have such ideas suggested to them but who later turn out to have made the wrong decision for themselves?

Among the most hard-nosed but likely arguments for an eventual slowing of the current trans stampede is the growing possibility of an avalanche of lawsuits. Although the United Kingdom, including the National Health Service, has opened itself up to this eventuality, the potential in Britain for successful future legal actions is nothing compared to the U.S.

Whereas Britain’s health service is struggling to satisfy the increased demand for gender reassignment surgery, in the U.S. there is not merely a movement but a business incentive for pushing this.

Just one of the signs that trans is an area where social demands are starting to attract business opportunities lies in the extraordinary levity with which trans activists—including some surgeons—are now talking about life-changing surgery. Some of this requires a strong stomach.

This excerpt was published with permission from the book “The Madness of Crowds: Gender, Race and Identity.”