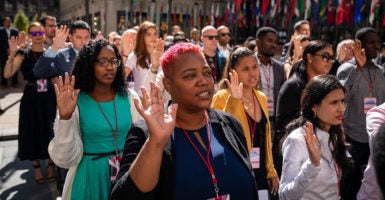 Conservatism speaks every language and can reside in any human heart. Pictured: New U.S. citizens recite the the Oath of Allegiance during a naturalization ceremony on Sept. 17, 2019, in New York City. (Photo: Drew Angerer/Getty Images)

This week, The Atlantic released its newest issue, provocatively titled “How to Stop a Civil War.” Leading its collection of essays is a fascinating piece by Yoni Appelbaum. In it, Appelbaum posits that at the crux of America’s vitriolic politics lies demographic change:

The United States is undergoing a transition perhaps no rich and stable democracy has ever experienced: Its historically dominant group is on its way to becoming a political minority—and its minority groups are asserting their co-equal rights and interests.

This, he suggests, has led to an impasse for the center-right, which refuses to adapt to changing demographics, instead doubling down on President Donald Trump’s white, working-class base.

Appelbaum explains, “When a group that has traditionally exercised power comes to believe that its eclipse is inevitable, and that the destruction of all it holds dear will follow, it will fight to preserve what it has—whatever the cost.”

But Appelbaum’s thesis doesn’t explain why, in his view, conservatives have abandoned the attempt to persuade new populations. Appelbaum himself acknowledges that a “conservatism defined by ideas can hold its own against progressivism, winning converts to its principles and evolving with each generation.” Why, then, have conservatives supposedly given up?

The answer lies in a simple truth: Conservatives haven’t despaired of winning over new converts.

And that fear of ideological change is actually driven by Democrats’ radicalism—and their overt suggestion that demographic change will provide the fodder for that radicalism.

Appelbaum rightly states, “The United States possesses a strong radical tradition, but its most successful social movements have generally adopted the language of conservatism, framing their calls for change as an expression of America’s founding ideals rather than as a rejection of them.”

But today’s successful social movements—the movements of the Democratic left—no longer bother with such niceties. Instead, they declare that America was, has been, and always will be a racist place, riven by hierarchies of power, a corrupt structure to be overturned by that emerging demographic majority.

The Democratic left then insists that immigration levels be increased both legally and illegally and suggests that its opponents are driven by unbridled racism.

Conservatism must indeed root out and destroy any elements of race-driven policy from its midst. Conservatism speaks every language and can reside in any human heart.

If the left wishes to avoid a civil war, it can start by doing the same: refraining from the argument that demographic change innately signals rewriting the definition of Americanism, and arguing in favor of that revision.