Here’s What a Big Coal Bankruptcy Has in Common With Teachers, GM Strikes 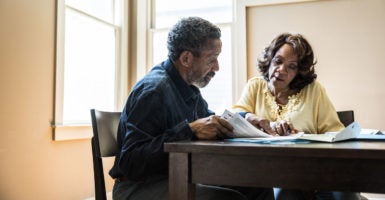 Instead of helping employers adapt so that their workers can keep their jobs, unions across the U.S. are blocking it, choosing instead to try to micromanage employers out of existence or into bankruptcy. (Photo: Stock/Getty Images)

In a competitive global economy, employers must be able to adapt to meet market demands. If they don’t, they’ll lose out to other businesses that do adapt, and offer better products and lower prices as a result.

Similarly, city and state governments that can’t or don’t adapt will lose residents and the economic output and tax revenues they take with them.

Unfortunately, high pension costs have hamstrung the ability to adapt for many companies and state and local governments.

Instead of helping employers adapt so that their workers can keep their jobs, unions across the U.S. are blocking it, choosing instead to try to micromanage employers out of existence or into bankruptcy.

Defined benefit pensions are largely a relic of the past for private sector, nonunionized workers. But where unions exist, onerous pension costs are dragging down companies and state and local economies.

The reason for the strike? A push for higher compensation, including shifting temporary workers to high-cost, full-employee positions, and an attempt to bring jobs back from Mexico to the U.S. Of course, higher compensation costs make it harder for GM to produce cars here, and ultimately, the union couldn’t stand up to the forces of globalization.

Although GM factory workers earn between $17 and $30 per hour, the automaker’s total compensation costs of $63 per hour for those workers are more than double their pay. In large part, that’s due to extremely high pension costs.

Instead of pushing for even higher compensation costs, the UAW should help reduce pension costs so that more workers can keep their jobs. While pension benefits are important to employees, most would be willing to accept a slightly less generous pension if it prevented tens of thousands of fellow employees from losing their jobs.

Another pension-plagued strike is the one that just ended in Chicago, where teachers went on strike for 11 days. In addition to lost education, families lost income and work days as they grappled with either staying home or finding child care.

Although wages were the big sticking point in the negotiations—the union wanted the 16% pay increase that the city proposed to occur over five years to instead accrue over three years—pension costs limit possible pay raises.

That’s because in addition to being among the highest-paid teachers in the nation, with a median salary of $75,000 that would rise to nearly $100,000 over five years under the mayor’s proposal, Chicago teachers enjoy extremely generous pension benefits. A teacher with a 30-year career receives a $76,500 pension for life.

But because past politicians and unions who promised generous pension benefits failed to negotiate and put aside the funds to pay those benefits, Chicago is not only making pension contributions for current teachers but also paying the unfunded costs of retired teachers’ pensions.

Because of its sorry state, Chicago’s public school system has a junk bond rating, below even that of Detroit. And the city’s debt already is driving out residents and businesses.

Chicago is the only city among the top 10 metropolitan areas in the U.S. to have lost population in each of the past four years. And enrollment in public schools is down almost 12% over the past decade.

Perhaps that’s because high pension costs are chipping away at other government services and requiring significant tax increases.

Already, Chicago residents have experienced a $1.1 billion property tax hike, a 29.5% tax on water and sewage bills, and a 100% increase in a telephone tax, among others, to pay for the city’s generous pension promises. If the teachers union had gotten its way, property taxes would have increased by more than $220 per year.

There’s no fair way to erase these pension costs, but there are ways to minimize the consequences. For starters, the Chicago teachers union should allow modest reforms to its pension system.

According to an economic analysis, Illinois teachers valued additional pension benefits at only 20 cents on the dollar, yet the city of Chicago is contributing 27% of teachers’ salaries—about $20,000 per teacher—to the pension system. That means that pension reforms could save taxpayers money and provide teachers with the pay increases they want.

Finally, we have the just-declared bankruptcy of the largest coal company in the U.S., Murray Energy Corp.

Coal bankruptcies are nothing new, and Obama-era regulations further exacerbated the industry’s decline. But most people don’t realize the toll that unfunded pension costs have taken on the coal industry.

Murray Energy was by far the largest remaining coal company contributing to the pension fund of the United Mine Workers of America. Although most coal production in the U.S. no longer is unionized, Murray Energy had a significant number of UMWA employees for whom it was paying extremely high pension costs.

Data from the union’s most recent financial filing, for 2017, suggests that Murray Energy may have been paying tens of thousands of dollars per year in pension contributions on behalf of each of its roughly 2,000 employees.

Employer contributions totaled $112 million, and if Murray Energy accounted for roughly 60% of the plan’s 3,500 participants, it would have paid $67 million, or $33,000 per worker.

And the sad reality is that current UMWA workers will receive little—if any—of those five-figure pension contributions because the union’s plan will be insolvent within three years.

It’s hard to compete with nonunionized coal companies that likely pay a couple of thousand dollars per year into their workers’ 401(k)s.

Long term, the solution is to transition to defined contribution 401(k) retirement accounts. If employers and governments contribute directly into workers accounts, they can’t short-change their employees and the contributions cannot be used to finance other government spending.

And if workers own their retirement benefits, they know how much money they have and no one can take that money away from them.

In the short term, grappling with $638 billion worth of unfunded private union pension promises and between $4 trillion and $6 trillion in unfunded state and local pensions will be no easy task. But there are reasonable solutions.

Employers and lawmakers need to be held accountable to properly fund the promises they make, and employers should be allowed to reform their benefit structures to minimize losses for employees and retirees.