Congress Must Look for Ways to Improve Our Federal Land Policies 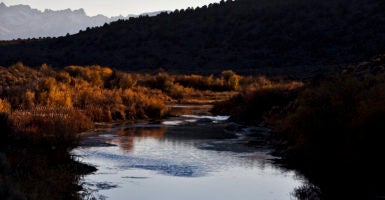 Thousands of leaves from trees and brush change color as the fall season moves in the eastern side of the Sierra Mountain Range in California. (Photo: Ted Soqui/Corbis via Getty Images)

The hearing—before the National Parks, Forests, and Public Lands Subcommittee—was unremarkable except for one observation; namely, the witnesses largely all disagreed with the clear partisan purposes of the hearing.

The hearing sought to revivify the 2016 occupation of Malheur National Wildlife Refuge in Oregon by followers of Ammon Bundy, who sought to overtake federal lands by force and made national headlines.

The claim—encapsulated by the hearing’s title—was that all conflict over federal land management by local communities, landowners, and states is anti-government, and dangerously so.

What unfolded from the witness panel was far more nuanced, however, both in describing conflict on federal lands and in seeking solutions.

The importance of protection of federal employees as they do their job was something no one disagreed with. But that doesn’t look at the causes of problems and, as in the Bundy case, why protection was needed in the first place.

We never were … ‘anti-government.’ But there have been and still are things that need to be discussed and looked at. And that goes for everywhere, well across America.

During the [Bundy] occupation, I got calls, literally, from Maine to California, and no matter how small the federal land mass was in a state, there was still issues with it.

That’s not to say it’s all bad or isn’t something that can’t be overcome. But again, the people need to be listened to.

It’s not surprising that there’s such potential for conflict concerning federal lands. While not exclusively a Western issue, federal land covers vast tracts of the West—covering more than half of Oregon, Alaska, Idaho, Utah, and Nevada.

That has major implications for states and individuals, and for their ability to foster a promising place to live with economic diversity, generate tax revenue for services such as education and public safety, and provide access to land for a variety of cultural, recreational, and economic activities.

Further, management of these massive and diverse lands is spread across multiple federal departments and bureaus governed by a maze of overlapping and often conflicting laws, missions, and regulations.

Presidents have implemented these laws in drastically different ways, creating tension and uncertainty.

A litigation culture—all but invited by broad, unclear, or outdated laws—has led to perverse incentives for land management decisions. And when people think they are not being listened to or the levers of power are out of reach, tensions spill over.

Conflict comes in many shapes and sizes. There was the dismaying case of the Bundys, but there are dozens of other cases that, though they don’t make national news, are no less impactful to the local communities and individuals.

Controversial national monument designations in Utah and off the coast of Massachusetts and the issue of roadless area designations in Alaska are examples of conflicts over federal lands. So are lower-profile examples involving the use of cabins in the Ottawa National Forest in Michigan and eminent domain grievances in Smoky Mountain National Park.

Shifting more control from Washington to those with direct knowledge of the lands and a clear stake in the outcome would be a step in the right direction.

Real solutions are site- and situation-specific decisions that reflect the unique circumstances, histories, and priorities of communities and land users. That takes time and compromise.

Rather than being irrelevant or a barrier to public land management solutions, real solutions respect private property owners as great assets. And real solutions empower states and communities to drive decision-making.

There are many ways to accomplish this. For some, it should mean reducing federal land holdings and transferring them to states.

For others, it could be replicating collaborative programs among the federal government, states, communities, and private property owners. Examples include Utah’s Grazing Improvement Program, the White Mountain Apache Tribe’s successful forest management, the Forest Service’s use of Good Neighbor Authority, Wyoming’s exception under the Antiquities Act, and the Federal Lands Freedom Act proposed in the 115th Congress.

For its part, Congress should do a wholesale review of federal lands and the muddle of laws governing them. There’s no easy shortcut to solutions.

Congress should encourage, agencies should pursue, and states and private individuals should initiate more collaborative approaches. Doing so will improve chances of reaching solutions past conflict—solutions that offer better, nuanced, and creative approaches to benefit people and the environment.