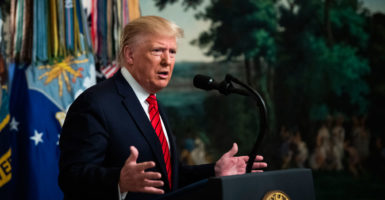 The death of Abu Bakr al-Baghdadi as U.S. special forces cornered the terrorist founder of the Islamic State was a blessing to humanity and justice.

But you wouldn’t know that from reading the widely panned headline from The Washington Post, which initially called the Islamist mass murderer an “austere religious scholar at the helm of Islamic State,” in its report on his death Saturday.

After the chief ISIS butcher blew himself up along with three children rather than surrender to U.S. forces who raided his compound in Syria, there was some well-deserved mockery of the Post headline, especially on Twitter at  #WaPoDeathNotices:

The Post quickly changed the egregious headline to say that al-Baghdadi was an “extremist leader,” rather than an austere scholar, but the fact that the newspaper initially went with the ridiculous headline—and a tepid article—is revealing, as was the rest of its coverage of the news story.

It highlighted a far bigger problem in coverage of the good news announced Sunday by President Donald Trump.

As Mollie Hemingway noted at The Federalist, the rest of the Post’s coverage was stunningly negative, given what should have been such a unifying moment.

The Washington Post is representative of the hard work that went into spinning the killing of Baghdadi into, somehow, a negative story for Trump, beginning with a hagiographic look at Baghdadi as not a brutal rapist and murderer of his political and religious foes, but as an austere religious scholar.

This contrasted sharply with the coverage of the killing of 9/11 perpetrator Osama bin Laden under President Barack Obama. At that time, bin Laden was rightly labeled the terrorist that he was.

It’s painfully clear that media outlets just can’t bear to give Trump a “win” on an event that should bring together all Americans.

FiveThirtyEight.com editor-in-chief Nate Silver said that many on the left were simply incapable of giving Trump “one good day,” which was clearly the case with the press as well.

A Washington Post columnist went so far as to criticize Trump for calling al-Baghdadi a coward. The line was later removed and was attributed to an “earlier version of this column.”

Al-Baghdadi was a mass-murdering rapist who tortured his victims, including a number of Americans. He founded and led a ruthless and barbaric “regime” that has become synonymous with evil.

His crimes were denounced, and his death properly labeled “a big win for America and the civilized world,” by a different Post—The New York Post—in a properly titled editorial, “Rot in hell, Abu Bakr al-Baghdadi.”

As over the top as that headline might seem, it was far more appropriate than The Washington Post’s attempt to downplay al-Baghdadi’s evil as well as the accomplishment of finally bringing him to justice.

By contrast, The Washington Post and The New York Times were highly laudatory of Obama’s agreements with Syria (to give up its chemical weapons) and Russia (to stop attacking U.S.-backed rebels) that ultimately proved shallow and ineffective.

There was no similar praise for Trump’s recent drawdowns and redeployments in Syria, which were labeled “victories” for ISIS, which just lost al-Baghdadi, and, it appears, his likely replacement in the span of just a few days.

It’s that sort of coverage from The Washington Post and so many other mainstream media outlets that has contributed mightily to America’s declining trust in our media institutions.

As in the cases of the Senate confirmation hearings for Supreme Court nominee Brett Kavanaugh and the confrontation of a Covington, Kentucky, teen with a Native American activist in Washington, and numerous examples of botched reporting on the Trump administration, it appears that the mainstream media is carrying water for one party and one political ideology, rather than remaining committed to dutifully pursuing the truth.