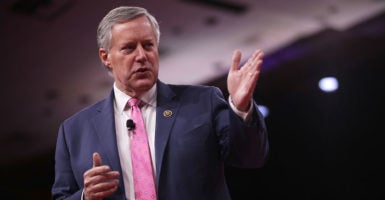 If Democrats are successful in impeachment efforts against President Donald Trump, voters will send them home, a leading House conservative said Friday at a gathering of “values voters” in Washington.

“Even before this president was sworn in they were talking about impeachment, and they’re bound and determined to do it,” Rep. Mark Meadows, R-N.C., said at the annual Values Voter Summit organized by FRC Action, the lobbying arm of the Washington-based Family Research Council.

“And we need to send a clear message [that] if they do it we will send them home,”  Meadows told the crowd at the Omni Shoreham Hotel.

House Speaker Nancy Pelosi, D-Calif., last month opened what she called an official impeachment inquiry, saying Trump’s actions as president “have seriously violated the Constitution,” and that Trump “must be held accountable.”

Pelosi said Trump had “seriously violated the Constitution,” citing his July 25 phone conversation with the president of Ukraine that she said was meant to “benefit him politically.”

Meadows, former chairman of the conservative House Freedom Caucus, said it has become commonplace for politicians to stray from what their constituents sent them to Congress to accomplish.

“We need to have some kind of vaccination for the Potomac fever,” the North Carolina Republican said, adding:

You know, it’s amazing when members of Congress and senators, they elected, you go out, you work hard, you try to make sure that they’re going to make a difference. They get elected, they raise their right hand.

I’ve said it here before, I might as well say it again: You know they have the backbone of a banana.

Meadows said that Americans need to be vocal with their elected representatives about their support of the Trump administration, so they aren’t surprised that a vote to impeach Trump could result in voters tossing them out.

“I can tell you that there is backbones that are like bananas that start to stiffen up when they hear from hundreds if not thousands of people from back home, because there is only one thing that a member of Congress fears [and that] is being voted out of office,” he said.

The Values Voter Summit, which runs Friday through Sunday at the Omni Shoreham Hotel in Washington, was created in 2006 to help inform and mobilize Americans to preserve the “bedrock values” of religious liberty, the sanctity of life, traditional marriage, and limited government. Since its inception, the primary sponsor has been FRC Action, the lobbying arm of the Family Research Council.