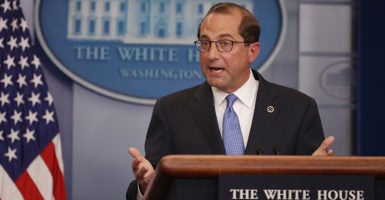 "The department I get to run is really the department of life,” Health and Human Services Secretary Alex Azar says at the Values Voter Summit. Pictured: Azar takes questions May 11, 2018, at the White House. Photo: (Chip Somodevilla/Getty Images)

Health and Human Services Secretary Alex Azar called President Donald Trump the most pro-life president in U.S. history Friday as he noted the accomplishments of his department and the administration.

“When I think about the very core of our mission, and why I am so proud to do the work we are doing, it’s pretty simple. The department I get to run is really the department of life,” Azar said in remarks at the Values Voter Summit in Washington, adding:

I’m so proud to say that because it has never been more true than today. HHS and its team have never fought more fiercely to protect life at all stages, from conception to natural death. That is thanks above all to the work, the leadership, and the courage of President Trump, the most pro-life president in American history.

The secretary talked about actions taken by states that violated the conscience rights of pro-life individuals and organizations.

In August, the Department of Health and Human Services launched an investigation into the University of Vermont Medical Center after a nurse’s complaint that she was forced to assist in an abortion.

“We recently issued a notice of violation to a major hospital [that] violated conscience law by requiring a nurse to assist in an abortion,” Azar said of the case. “Forcing medical staff to assist in taking human life is wrong, plain and simple. Under President Trump, we will not tolerate it.”

“We also took major actions against Hawaii and California to protect the conscience rights of pro-life pregnancy centers when state laws coerced these centers into posting notices that referred women to abortion providers,” Azar said. “We issued an unprecedented notice of violation. As a result of that action, Hawaii signed a resolution agreement with the Trump administration not to enforce its own discriminatory law.”

The Trump administration isn’t just taking pro-life actions in the United States, Azar said as he talked about the recent meeting in New York of the United Nations General Assembly.

“It’s discouraging and disheartening to see how international organizations and wealthy countries can bully countries on matters that are of fundamental importance like that sacred role of the family and the right to life,” Azar said.

Azar joined Secretary of State Mike Pompeo in calling on other nations to oppose efforts to suggest that abortion is a necessary element of health care and a fundamental human right.

“The eventual declaration from that meeting included terms that without caveats can and have been used to bully lower-income nations regarding their policies on issues like abortion,” Azar said.

But the Trump administration responded with a coalition of countries, he said:

Following President Trump’s lead, we gathered a coalition of 21 nations representing more than 1.3 billion people and four of the 10 largest nations on earth. Together, we took a stand. We delivered a clear message.

Each nation has a sovereign right to protect the lives of its own citizens and to protect the role of the family within their own borders. We made it unequivocally clear. Under President Trump, the United States will never tolerate language that implies there is an international right to abortion.