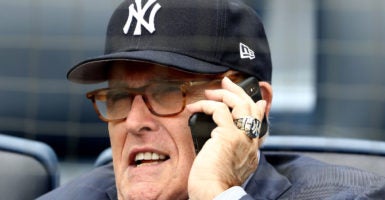 Rudy Giuliani, former New York City mayor and now a personal lawyer for President Donald Trump, attends the May 28 game between the New York Yankees and the Houston Astros at Yankee Stadium in the Bronx. (Photo: Elsa/Getty Images)

The Republican chairman of the Senate Judiciary Committee, Lindsey Graham, has invited Rudy Giuliani, President Donald Trump’s personal lawyer, to testify before his committee amid House Democrats’ move to launch an impeachment inquiry into the president.

Giuliani has been vocal about stories of corruption in Ukraine, sounding off on allegations that former Vice President Joe Biden influenced Ukraine’s decision to fire a top prosecutor. That prosecutor, Viktor Shokin, was looking into a Ukrainian natural gas company where Biden’s son, Hunter Biden, sat on the board.

Have heard on numerous occasions disturbing allegations by @RudyGiuliani about corruption in Ukraine and the many improprieties surrounding the firing of former Prosecutor General Viktor Shokin.

“Given the House of Representatives’ behavior, it is time for the Senate to inquire about corruption and other improprieties involving Ukraine,” Graham tweeted Tuesday. “Therefore, I will offer to Mr. Giuliani the opportunity to come before the Senate Judiciary Committee to inform the committee of his concerns.”

Therefore I will offer to Mr. Giuliani the opportunity to come before the Senate Judiciary Committee to inform the committee of his concerns.

The House launched an impeachment inquiry into Trump on Sept. 24 after an August whistleblower complaint alleged that the president had asked Ukrainian officials to look into Joe Biden and his son. The complaint was largely based on a July 25 phone call between Trump and Ukrainian President Volodymyr Zelenskyy.

If a House majority votes for impeachment, the inquiry moves to the Senate, where a trial is held to determine whether a president is ousted from office.