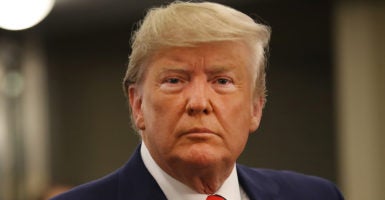 "The wall is going to happen, whether the president’s opponents like it or not," writes James Carafano. (Photo: Spencer Platt/Getty Images)

If President Donald Trump is for it, his liberal opponents are against it.

Nowhere is that truism more true than regarding securing the border and enforcing immigration law.

In Congress, traditional bipartisan support for funding border security and carrying out the laws on the books have broken down. The more stridently Trump emphasized the importance of cracking down on illegal migrants, the more emphatic the other side advocated the opposite—no money for the border wall, disbanding Immigration and Customs Enforcement, ending deportations, and gutting workplace enforcement.

Yet, even as the other side ramps up its anti-Trump stance, in reality it has already lost.

To date, the signature act of resistance has been opposing funding border security. On Dec. 21, Congress began the longest government shutdown in U.S. history, in part over the refusal of the president’s political opponents to fund the wall on the U.S.-Mexico border.

Rather than throw up his hands, Trump undertook a controversial effort to reprogram other appropriations to repair and expand the wall along the U.S.-Mexico border.

Efforts to block him in court failed. As a result, the administration now has the plan, money, resources, contracts, and land to put in place 450 miles of state-of-the-art border wall by the end of 2020.

The wall is going to happen, whether the president’s opponents like it or not.

And, the wall is going to have impact. When completed, it will cover the most heavily trafficked migrant routes across the border, making illegal border crossing significantly more difficult.

Indeed, obstacles are already having an impact.

“The last few months have seen a significant decline in Border Patrol arrests, thanks in part to attempts by the Trump administration to deter and discourage illegal immigration,” writes David Inserra, a homeland security analyst with The Heritage Foundation.

In addition to building more wall, the administration has adopted a wave of other measures to deter and discourage illegal immigration.

For example, the Department of Homeland Security has sought to discourage abuse of asylum claims by requiring applications to be adjudicated in Mexico before the illegal immigrants enter the U.S.

Recently, the government sent 5,000 individuals who had illegally crossed the border and applied for refugee status back to Mexico to await the processing of their claims. Of the 5,000, two—that’s right, just two—were determined to have merit.

The vast majority were not real refugees, accepting bus rides back to their home countries, or they simply left on their own and didn’t bother to wait for their applications to be processed.

By cracking down on meritless claims, loopholes, and abuses, even without the cooperation of Congress, the administration is sending a strong message that the U.S. means business.

The president has also been winning in the courts, where high-profile cases are increasingly turning the administration’s way.

Recently, for example, a Supreme Court ruling allowed the Trump administration to enforce nationwide restrictions that would prevent most Central American immigrants from seeking asylum.

Just a few months ago, projections were that 1 million illegal aliens would enter the U.S. this year. That projection has already been halved. Furthermore, the administration has committed to doubling down on deporting illegal aliens.

Round one to Trump.

We have proposed two legislative fixes that would dramatically reduce the immigration court backlog and prune meritless cases going forward.

Immigration judges should have the ability to dismiss a case for failure to state a claim and the power to render final adjudications at the pleading stage, as we have written here before.

Those two tools, which all other judges have, would reduce the backlog, which stands at almost 1 million cases, by 40% to 60%, according to experts.

The attorney general should also give immigration judges contempt authority—that is, the authority to hold individuals accountable for the offense of being disobedient or disrespectful to the court—so that they can more effectively manage their dockets.

Congress passed a statute 22 years ago giving immigration judges contempt authority, but delegated to the attorney general the task of implementing the regulations, as we wrote here.

But Trump’s victory to date is just round one. As Inserra concludes, “until calmer heads on the left can agree that illegal immigration should be stopped, imperfect solutions are better than none at all.”

Still, he adds, a “far better solution would be legislation to fix these loopholes in a more permanent and measured way.”

To that end, the administration has finished a draft bill that would put permanent fixes in place. The bill won’t pass in this Congress because liberals control the House. But the time for choosing is coming.

Americans will have to decide if they want the next round to go to Trump and a new Congress—or if they want to go the other way and embrace open borders.