Father of Parkland Victim on What Could Have Stopped the Tragedy 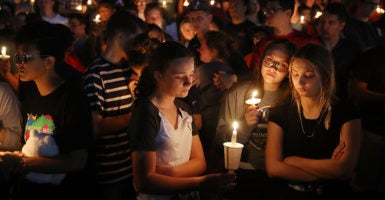 People attend a candlelight vigil for the victims of the shooting at Marjory Stoneman Douglas High School on Feb. 15, 2018, in Parkland, Florida. (Photo: Joe Raedle/Getty Images)

“This incident that occurred, this outrageous tragedy that we have had to deal with, we really had no signs, no warning, no tips,” announced Broward County School Superintendent Robert Runcie on CNN on Feb. 15, 2018.

Runcie was speaking of the tragic school shooting at Marjory Stoneman Douglas High School that had left 17 students and staff dead the day before.

“No signs, no warning.” Well, that’s simply not true.

The confessed shooter in Parkland, Florida, had a long history of violence that school officials were well-aware of—a history that should have alerted them to the potential risk.

Andrew Pollack and Max Eden document this in their new book “Why Meadow Died: The People and Policies that Created the Parkland Shooter and Endanger America’s Students.” Pollack is the father of Meadow, a girl who lost her life on the third floor of Stoneman Douglas that day.

The warning signs were abundant—from animal torture and attempted suicide, to bringing knives and bullets to school and an overall obsession with guns. Police had been called to the shooter’s home 45 times to deal with incidents involving him or his brother.

Pollack and Eden identify the shooter throughout by his prison number, 18-1958. 18-1958 had been in a fight in school, repeatedly issued death threats to other students, and was prohibited from bringing a backpack to school so as not to be able to conceal weapons in it.

Yet as Pollack notes, when the shooter bought his guns, “he had a totally clean record. On paper, he was a model citizen.”

How did his record stay so clean?

Pollack and Eden meticulously document that district and school officials did not stop 18-1958 because of the district’s policy to limit student suspensions and expulsions. That policy—the PROMISE Program—also deterred educators from referring students to police.

Such leniency, Eden argues, meant that officials neglected opportunities to refer 18-1958 to law enforcement, allowing him to avoid arrest, which ultimately made it possible for him to buy a gun.

While the media at large focused on lack of “gun control” as the major problem, Pollack and Eden explain that PROMISE and the related rules on student discipline—which the Obama administration had then promulgated in school districts across the country—are undeniably at the center of this tragedy.

The PROMISE Program “deters teachers from reporting disciplinary problems and makes administrators less inclined to trust teachers’ intuition and more inclined to make decisions that produce the disciplinary ‘data’ that their district-level superiors want to see,” Pollack and Eden write.

At every possible turn, the adults in the system ignored glaring warning signs. Pollack and Eden write that 18-1958’s story is “a cautionary tale of what can happen when everyone in a school system has an incentive to do the wrong thing.”

Pollack and Eden’s book is difficult to read because Pollack’s pain, sorrow, and frustration is present on nearly every page. Furthermore, the detailed recounting of the tragedy pulls no punches in identifying the policies that allowed this disaster to happen.

“Every step of the way, [district officials] had a choice: do the responsible thing and help [18-1958], or do the politically correct thing and ignore him. They made the wrong choice every single time,” Pollack writes in one section.

The most troubling part of the book, aside from the actual retelling of the shooting, is the ending.

After an exhausting effort to change the composition of the Broward County School Board failed in 2018, the authors express fear that voter apathy is so deeply-rooted that even a disaster like Parkland is not enough to get people interested in local elections.

In his epilogue, Pollack pleads with readers: “You simply have to step up, get involved, and make a difference for your children. You can’t let your schools be run like the Broward County Public School District.”

Readers will be left shaking their heads at the district’s systemic failures, administrators’ abdication of responsibility, and the abundance of adult negligence.

Every school leader should read this book and safeguard against such a lax disciplinary environment being replicated in their districts—and every parent should read it to hold school officials accountable. Children’s lives depend on it.