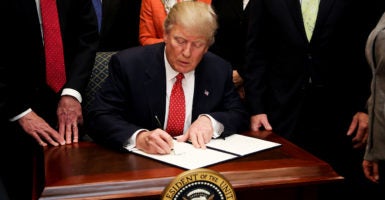 Thursday saw a major win for the rule of law, property rights, and the environment: The Trump administration announced that it had finalized its repeal of President Barack Obama’s infamous 2015 Clean Water Rule.

For decades, the Environmental Protection Agency and the U.S. Army Corps of Engineers have struggled to define the Clean Water Act’s term “waters of the United States” in a manner that can pass judicial scrutiny.

That definition is extremely important, because it clarifies what waters the agencies can regulate under the statute.

Instead of learning from past mistakes, the Obama administration decided it would take the federal overreach to a new level while ignoring the plain language of the Clean Water Act.

There’s a reason why there was such diverse and widespread opposition to this Obama rule: It’s a rule that could have made it very difficult for Americans to engage in even ordinary activities, such as farming or building a home.

The Obama rule was so extreme it would have regulated waters that couldn’t even be seen by the naked eye.

…distant regulators using “desktop tools” can conclusively establish the presence of a “tributary” on private lands, even where the human eye can’t see water or any physical channel or evidence of water flow.

The agencies even claim “tributaries” exist where remote sensing and other desktop tools indicate a prior existence of bed, banks, and [ordinary high-water marks], where these features are no longer present on the landscape today.

The rule would have made it possible to regulate “waters” that were, in effect, dry land, such as a depression in land that holds water a few days a year after heavy precipitation.

Then there’s the “we will know a regulated water when we see it” aspect of the rule. If waters didn’t fall under specific categories as listed in the rule, then the Obama rule created a backup plan to help ensure the agencies could still have the ability to regulate additional waters.

The rule made it possible for the agencies to regulate some waters on a case-by-case basis if they decided that the water had a “significant nexus” to certain regulated waters.

A property owner couldn’t have known what this would cover, because such determinations would have been at the subjective whim of agency officials.

That’s particularly problematic because the Clean Water Act has both civil and criminal penalties.

The ongoing vagueness problem with the Clean Water Act is a concern that the Supreme Court has repeatedly brought up, including then-Justice Anthony Kennedy, who stated in 2016 in the oral argument for Army Corps of Engineers v. Hawkes Co., “[T]he Clean Water Act is unique in both being quite vague in its reach, arguably unconstitutionally vague, and certainly harsh in the civil and criminal sanctions it puts into practice.”

At the start of the Clean Water Act, Congress made it clear that it’s “the policy of the Congress to recognize, preserve, and protect the primary responsibilities and rights of States to prevent, reduce, and eliminate pollution … .”

The Obama rule ignored this state role. When the federal government tries to regulate every water imaginable, it doesn’t leave much room for states and local governments to address water issues.

Critics will argue that getting rid of this vast federal role in regulating waters will undermine water protection. Congress rejected that argument when it passed the Clean Water Act.

Legislators recognized that states should play the lead role in addressing water pollution. That makes sense, because states are in the best position to address most water issues, and that’s because they are closest to the issues and can develop policy that’s tailored to address specific problems.

The Clean Water Act regulations are also just one piece in a massive web of laws and programs that helps to protect surface waters. (In addition to other federal programs and laws, there is, of course, state and local governments.)

It should also be noted that a separate federal law, the Safe Drinking Water Act, protects the water we drink.

On Feb. 14, the EPA and the Army Corps of Engineers proposed their new definition, which is a major improvement from the Obama rule.

There are still improvements that are needed before any new definition is finalized. Justice Antonin Scalia in his plurality opinion in Rapanos v. United States wrestled with many of the challenges that admittedly the agencies face when developing a workable definition of “waters of the United States.”

If the final rule is consistent with this thoughtful opinion, then the Trump administration will succeed where past administrations have failed in developing a workable, legally defensible definition of “waters of the United States.”

Until then, the Trump administration should be commended for getting rid of the Obama rule, which failed on all counts.