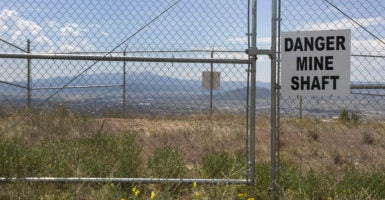 An EPA task force has listed sites requiring the agency’s “immediate and intense attention.” Pictured: Berkeley Pit in Butte, Montana, seen here in July 2017, is a former open-pit copper mine that is part of the largest Superfund site in the U.S.. (Photo: Janie Osborne/Getty Images)

The Environmental Protection Agency has hit the acceleration button to clean up Superfund sites across the country on President Donald Trump’s watch, according to a new task force report detailing progress over the past two years.

The Superfund Task Force, commissioned in May 2017, developed a list of sites requiring the EPA’s “immediate and intense attention.”  Formally known as the “Administrator’s Emphasis List,” EPA officials released it in December 2017, less than a year after Trump took office.

The new task force report spotlights the sprawling Tar Creek Superfund site as one of several where the government has made “substantial progress.”

Tar Creek includes thousands of acres of lead and zinc mining areas in northeast Oklahoma, southeast Kansas, and southwest Missouri. Because of the site’s “complexity and size,” the report says, a cleanup that goes back to 1984 will take several more years to complete.

The EPA has joined with the state of Oklahoma and the Quapaw tribe of Native Americans in a yearlong effort to formulate a “strategic plan” for Tar Creek after it was added to the agency’s Emphasis List. The strategic plan, which will be released later this month, assesses cleanup needs, risks, and economic potential for the site.

“The work of the Superfund Task Force over the past two years is paying dividends for communities nationwide, including those near the Tar Creek Superfund site,” Regional Administrator Ken McQueen said in a press release.

“EPA will continue working with our partners toward a cleanup that will benefit the surrounding communities,” McQueen said.

EPA officials say they will continue to update the Emphasis List on a quarterly basis.

The Superfund program dates to 1980, when Congress passed the Comprehensive Environmental Response, Compensation and Liability Act. The legislation provides funds for cleaning up thousands of sites across the country laced with such contaminants as lead, asbestos, and dioxin-infused soil, as well as radiation.

Superfund sites include “manufacturing facilities, processing plants, landfills, and mining sites,” according to the EPA’s website.

Those sites with known or potential releases of “hazardous substances, pollutants, or contaminants” are placed on the agency’s National Priorities List.

In addition to its efforts aimed at what it calls expediting cleanup and remediation, the task force said it sought to reinvigorate “responsible party cleanup and reuse,” promote third-party private investment, boost redevelopment and revitalization among communities, and develop a strategy for stakeholder engagement. The EPA’s press release details how officials met some of these goals.

“Thanks to the hard work of EPA career officials, the Superfund Task Force has strengthened the program in numerous ways, from accelerating cleanups to promoting redevelopment to improving community engagement,” EPA Administrator Andrew Wheeler said in a written statement, adding:

The agency prepared an online storyboard highlighting the task force’s success stories across the country.