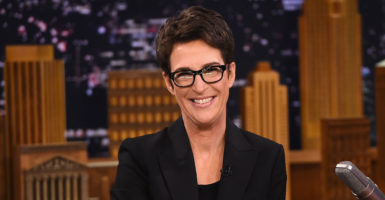 OANN is suing Maddow, MSNBC, Comcast Corporation and NBC Universal for defamation, alleging Maddow “maliciously and recklessly” went after the network by suggesting it is a Russian state propaganda outlet. (Photo: Theo Wargo/Getty Images for NBC)

OANN is suing Maddow, MSNBC, Comcast Corporation and NBC Universal for defamation, alleging Maddow “maliciously and recklessly” went after the network by suggesting it is a Russian state propaganda outlet, the complaint reads, according to Law and Crime. Maddow said that OANN “really, literally is Russian propaganda” on “The Rachel Maddow Show” in July.

Maddow’s comment was based on The Daily Beast article stating OANN’s Kristian Rouz is a “Russian national on the payroll of the Kremlin’s official propaganda outlet, Sputnik.” OANN demanded retraction from The Daily Beast reporter and Maddow on July 29.

“This is vile, sensationalistic reporting,” OANN’s lawyer, Skip Miller, said according to a previous press release. “These defamatory statements must be retracted immediately. One America News Network has no connection to the Russian government or any other government — no connection whatsoever, financial or otherwise.”

Comcast is being sued for refusing to carry OANN as part of its cable programming because the network could go against liberal politics of MSNBC, according to the complaint. The lawsuit also alleges that Maddow and the other defendants knew her comment was false. It suggests the statement was intentionally made to hurt OANN because of the network’s conservative views.

OANN’s lawyers gave Maddow and The Daily Beast until Aug. 15 to retract its statements, according to the cease-and-desist requests sent on July 29.

“One America is wholly owned, operated and financed by the Herring family in San Diego,” Miller said according to a statement. “They are as American as apple pie. They are not paid by Russia and have nothing to do with the Russian government.”

“This is a false and malicious libel, and they’re going to answer for it in a court of law.”

MSNBC did not immediately respond to a request for comment.