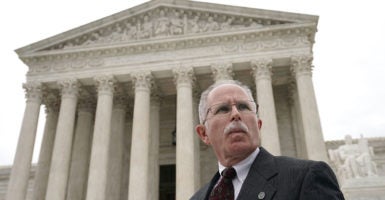 Mark Janus, a public employee in Illinois who sued a union for deducting fees to finance political action he disagreed with, in front of the Supreme Court on Feb. 26, 2018. Labor unions are trying to get around his victory, a think tank says. (Photo: Alex Wong/Getty Images)

Labor unions are working with allies in state legislatures to counteract a Supreme Court ruling that invalidated mandatory union dues and fees for government employees, according to a new report from a free-market think tank.

In June 2018, the high court ruled that “agency shop” laws requiring nonunion government employees to pay the union violate the First Amendment rights of those who object to the union’s political agenda.

“Compelling individuals to mouth support for views they find objectionable violates that cardinal constitutional command, and in most contexts, any such effort would be universally condemned,” Justice Samuel Alito said in his majority opinion in Janus v. American Federation of State, County, and Municipal Employees.

But in the months following the Supreme Court ruling, the Commonwealth Foundation’s report says, “Big Labor” has sought to exploit “policy weakness” in state laws.

One example, according to its report: “the lack of clear statutory language prohibiting or limiting union privileges such as release time, the payroll deduction of union dues and other political money, and the scope of collective bargaining.”

Enactment of these privileges potentially jeopardizes the free speech rights of government employees while adding costs to state budgets, the Commonwealth Foundation argues.

“We are seeing that, post-Janus, government unions and their allies will capitalize on legislative majorities, political weaknesses, and vague labor law to create statutory protections for Big Labor,” the report says, referring to the high court ruling.

On the other side of the ledger, “the more pro-worker and pro-free market, right-to-work states are less active in solidifying Janus and similar labor reforms,” the report laments.

The Daily Signal sought comment on the report from the Pennsylvania State Education Association, which counts about 180,000 members as the largest public sector union in the state. As of publication time, the teachers union had not responded.

Figures compiled from Ballotpedia show that, as of early August, 102 “Janus-related bills” have been introduced in state legislatures since the Supreme Court ruled that mandatory union dues violate First Amendment freedoms, the Commonwealth Foundation says.

The majority of these bills include “union-backed policies” and seven bills “backed by labor leaders” have become law, the report says.

Mark Janus, a child support specialist at the Illinois Department of Healthcare and Family Services, was the lead plaintiff in the case that went to the high court.

Janus discussed his experiences as a state worker during the August meeting of the American Legislative Exchange Council in Austin, Texas.  ALEC, as the group is known, is a nonpartisan network of state lawmakers who support constitutional, limited government and it produces model legislation along those lines.

Janus warned that union leaders are making a concerted effort to “maintain their monopoly” by refusing to allow public employees to resign their union memberships.

He expressed concern about the number of bills moving at the state level that could undermine his victory at the Supreme Court.

“We have a monumental task ahead of us,” Janus said.

Janus told The Daily Signal in an interview that checks and balances limit the power of organized labor in the private sector but don’t exist in the public sector.

“In the public sector, there are no checks and balances,” he said, adding:

The unions are negotiating with people who they helped to elect, and these elected officials can either go raise taxes or move items around in their budget or sacrifice needed programs. But in the private sector, there are checks and balances because companies can resist certain demands. They can move their operations, and they can also go out of business.

The Commonwealth Foundation report includes an online, interactive database of labor laws in all 50 states.

“This report warns that a Supreme Court decision is in danger of being undermined by politically savvy actors at the state level,” Charles Mitchell, president and CEO of the Commonwealth Foundation, said in a press release.

“Advocates for workers cannot rest on their laurels and expect public employees’ newly restored rights to be respected,” Mitchell said. “States must pass laws that enforce and protect the Janus ruling.”

The Supreme Court’s Janus ruling affects about 5 million government employees in 22 states who no longer are required either to join a union or pay related fees as a condition of employment.

Pennsylvania stands out as one state working to implement labor law reforms that would bring it into compliance with federal law.

State Rep. Kate Klunk, a York County Republican, introduced a bill (HB 785) that would require government employers to notify workers of their rights.

Pennsylvania also is home to court cases, including this one, involving public employees who allege their unions refused to allow them to resign their memberships.