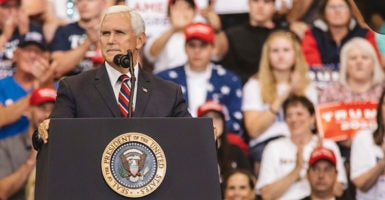 Veterans gave Vice President Mike Pence a standing ovation on Wednesday when he told them about the Trump administration’s reversing of the bans on religious symbols in veterans hospitals, declaring flatly, “The Bible stays.”

Pence was discussing specifically a New Hampshire lawsuit when he addressed the 101st American Legion National Convention in Indianapolis in his home state of Indiana.

“As we meet the health care needs of our veterans, let me make you another promise,” the vice president said. “This administration will always make room for the spiritual needs of our heroes at the VA as well.”

In January, the Manchester Veterans Affairs Medical Center in New Hampshire removed a Bible—carried by a prisoner of war in World War II—that was on display on a “Missing Man table” after a secularist group, the Military Religious Freedom Foundation, objected.

“You might’ve heard even today that there’s a lawsuit to remove a Bible that was carried in World War II from a Missing Man table at a VA hospital in New Hampshire. There’s a lawsuit underway,” Pence said.

After receiving complaints about its removal, hospital officials restored the Bible in February. In May, however, a Vietnam veteran sued to have the Bible removed.

“It’s really no surprise, because, under the last administration, VA hospitals were removing Bibles and even banning Christmas carols in an effort to be politically correct,” Pence said.

“Let me be clear: Under this [administration], VA hospitals will not be religion-free zones,” he tweeted. “We will respect the freedom of religion for every veteran of every faith. New Hampshire VA—the Bible stays!” Pence said.

As The Daily Signal reported earlier this week after an interview with VA Secretary Robert Wilkie, the department issued a revised directive to permit religious literature, symbols, and displays at agency facilities following a string of incidents in recent years in which individual medical centers banned Christmas trees and carols, removed Bibles, and restricted chaplains.

The VA has had inconsistent policies across the country. The new guidelines, which were adopted in July, referenced a recent Supreme Court ruling upholding the constitutionality of a prominent Maryland roadside cross memorializing those who died in World War I. That case highlighted the important role that religious symbols play in the lives of Americans.

After the New Hampshire lawsuit was filed in May, First Liberty Institute, a legal group that defends religious freedom, sent a letter to Wilkie urging a policy clarification. First Liberty represents the Northeast POW/MIA Network, which was responsible for the contested display.

“We are representing their interest in the case and have filed a motion to intervene,” Mike Berry, chief of staff for the Plano, Texas-based First Liberty Institute, which also was involved in the Maryland cross case, said.

“The Bible has historical significance and should be presumed constitutional,” Berry told The Daily Signal. “To have a display with religious symbols consistent with history is what we have with the POW/MIA display.”

The new policy is a “shame” and a violation of separation of church and state, said Mikey Weinstein, president of the Military Religious Freedom Foundation, which is representing the plaintiff in the New Hampshire case.

“The Veterans Administration is what is called a ‘state actor,’ and therefore, must completely comply with the No Establishment Clause of the First Amendment of the Bill of Rights of our U.S. Constitution,” Weinstein said in a statement Wednesday. “The imperious and illicit display of ONLY the Christian Bible and related to Christian material at VA facilities is a scandalous outrage that defies the very foundations of our United States Constitution.”