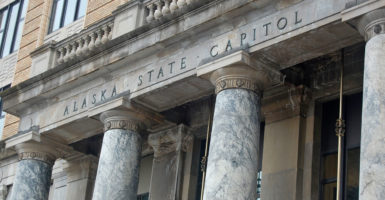 Clarkson recommends to Dunleavy that Alaska implement a new payroll deduction system to ensure that a government employee “freely consents” to payroll deductions for union fees, and does so in a “knowing, intelligent, and voluntary” manner.

In response to the 12-page opinion, which he requested, Dunleavy said it “clearly articulates” that Alaska doesn’t comply with the Supreme Court’s ruling.

“In the coming days and weeks, my administration will be working to ensure the state is in full compliance of the law and that Alaskans are informed of their rights,” the governor said in a press release.

Clarkson and Dunleavy are Republicans who took office in December.

The high court’s ruling affects about 5 million government employees in 22 states who no longer are required either to join a union or pay related fees as a condition of employment.

Mark Janus, a child support specialist at the Illinois Department of Healthcare and Family Services, was the lead plaintiff in the lawsuit.

The states most affected by the ruling include those, such as Alaska, that are not already right-to-work states.

Dunleavy’s predecessor as governor, William Walker, a former Republican who became an Independent in 2014, dropped out of his re-election race in October and endorsed Democrat Mark Begich.

The Janus decision “invalidated” a provision of the state’s Public Employee Relations Act, which “assigns public employers the task of deducting from their employees’ wages any dues, fees, or other benefits and transmitting these funds to the union, if the employee provides written authorization to do so,” Clarkson says in the legal opinion.

But because Alaska allowed certain collective bargaining provisions to remain in place that “effectively ceded to the unions widespread power to elicit employees’ consent to payroll deductions and fees,” the attorney general concludes, the state’s payroll deduction process is “constitutionally untenable.”

The current system allows the unions to design the form by which an employee gives written authorization for payroll deductions. But there is no guarantee that the unions’ forms clearly identify—let alone explain—the employee’s First Amendment right not to authorize any payroll deductions to subsidize the unions’ speech.

Clarkson also makes the point that “because the unions control the environment in which the employee is asked to authorize a payroll deduction, there is no guarantee that an employee’s authorization is ‘freely given.’”

“For example,” he writes, “some collective bargaining agreements require new employees to report to the union office within a certain period of time, where a union representative presents the new hire with the payroll deduction form.”

This is a problem, the attorney general says, because the union’s process “is essentially a black box” that the state can’t examine, and it “has no way of knowing whether the signed form is ‘the product of a free and deliberate choice rather than coercion or improper inducement.’”

Without this knowledge, he writes, Alaska “lacks ‘clear and compelling evidence’ that the employee’s consent to have union dues and fees deducted from his or her paycheck was ‘freely given.’”

Justice Samuel Alito, who wrote the high court’s majority opinion in Janus, made it clear that public employees should be permitted to affirmatively opt in to paying union dues, rather than having to navigate their way through a process of opting out.

Alaska’s governor has the authority to ensure that an employee’s consent is up to date, and that his or her First Amendment rights are secure, Clarkson tells Dunleavy.

He recommends that the state provide for a regular opt-in period for employees to decide whether they “want to waive their First Amendment rights by authorizing future deductions from their wages.”

Using an administrative order, the attorney general writes, the governor may identify a period of one year as the “appropriate amount of time” for an employee’s waiver of First Amendment rights to remain in effect.