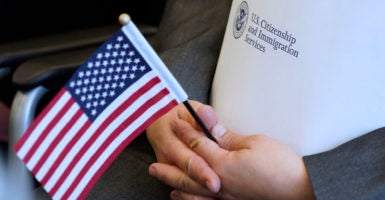 The "public charge" provision ensures that new, legal immigrants to our country are self-sufficient individuals who will be a net plus for our economy. Pictured: An applicant holds an American flag and a packet while waiting to take the oath to become a U.S. citizen at a naturalization ceremony on April 10 in Salt Lake City, Utah. (Photo: George Frey/Getty Images)

The latest claims against the Trump administration over its enforcement of the “public charge” provision in federal immigration law are nonsensical. There is nothing “racist” or “immoral” about this requirement at all.

On Aug. 14, the Department of Homeland Security published its new rule on how it will determine if “an alien applying for admission or adjustment of status is inadmissible … because he or she is likely at any time to become a public charge.”

Being a “public charge” means that an individual is unable to support himself and instead relies on public benefits such as welfare. This is a long-standing principle of U.S. immigration law, first implemented at the federal level in 1882.

It is common sense—and a smart choice in the best interests of the country as a whole—to try to ensure that new, legal immigrants to our country are self-sufficient individuals who will be a net plus for our economy, rather than a drag on expensive medical, housing, welfare, and other public assistance programs paid for by the American taxpayer at both the state and federal level.

These programs are a major source of our trillion-dollar budget deficits and the increase in our public debt. Why would we want to bring in immigrants who will only add to that deficit and that debt?

The statute does not define “public charge,” but leaves that up to the federal government. Congress articulated our immigration policy that “aliens within the Nation’s borders not depend on public resources to meet their needs, but rather rely on their own capabilities and the resources of their families, their sponsors, and private organizations.”

This is intended to prevent damage to the economy and increased public debt, of course, but also to ensure that “the availability of public benefits not constitute an incentive for immigration to the United States.”

In the past, federal rules focused only on “the receipt of public cash assistance for income maintenance or institutionalization for long-term care at Government expense.” This definition essentially ignored the numerous other costly public benefits the government provides.

Thus, if an alien was receiving non-cash benefits under the Supplemental Nutrition Assistance and food stamp programs; Medicaid; and housing vouchers and subsidies, he was not considered a “public charge” on the taxpayer.

The administration’s new rules simply define the public charge requirement to reflect today’s system of government benefits. In other words, they bring reality into the system.

In short, the rule insists that to become a permanent resident in the U.S. with eventual access to U.S. citizenship; to be admitted as a legal immigrant on a visa; or to change your status and extend your stay or apply for citizenship when you are already legally in the country, an individual must not be reliant on, or likely to become reliant on, such welfare programs.

There are numerous exceptions in the new rule. For example, it does not apply to humanitarian-based immigration programs. This ensures that refugees, asylum-seekers, victims of sex trafficking, or other special cases such as victims of qualifying criminal activity (including domestic violence) won’t be barred by the public charge requirement.

It does not apply to aliens who serve in the U.S. military or to pregnant women and aliens under the age of 21 who receive Medicaid benefits. It also won’t apply to Medicaid benefits paid for emergency medical or school-based services (such as provided under the Individuals with Disabilities Education Act).

Additionally, if the Department of Homeland Security decides that an immigrant is not admissible because of the public charge rule, in limited circumstances, the agency will offer the aliens the opportunity to post a public bond. The amount of the bond will vary depending on the alien’s circumstances.

This rule protects U.S. taxpayers by ensuring that new immigrants to the U.S. will not add even more spending to the welfare and entitlement programs already driving American debt to unsustainable levels.

It also ensures that the U.S. is granting entry to those who are self-reliant, rewarding such industrious immigrants with the privilege of staying and working in the U.S. and eventually gaining access to the most prized possession of all—American citizenship.

Originally published in The Detroit News