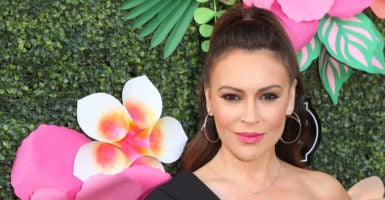 Actress Alyssa Milano revealed on her Monday podcast that she had two abortions in 1993, saying, “It was absolutely the right choice for me.”

The actress discussed her abortions on her podcast, “Sorry Not Sorry” according to The Hollywood Reporter. Milano said that she had both abortions in 1993 while in a relationship where she was “in love for the first time.”

“I knew I was not ready to be a parent,” Milano said, explaining that she was on birth control when she became pregnant and believed she had a career, future, and potential ahead of her.

Milano said that she was raised Catholic and went after Catholicism as “a faith I was coming to realize empowered only men to make every single decision of what was allowed and what was not allowed.”

Milano obtained her first abortion in 1993 but became pregnant again a few months later and then obtained her second abortion. She said that this was the right decision for her, and that if she had not obtained these abortions her life would be lacking its “great joys.”

She also said that if she had not had these abortions she would not have her two children, her career, her platform, or her husband.

“Fifteen years after that first love had fizzled, my life would be completely lacking all its great joys,” she said, according to The Hollywood Reporter. “I would never had been free to be myself—and that’s what this fight is all about: freedom.”

“I refuse to let anyone else’s bulls— morality force me into a life of premarital celibacy,” Milano said.

“I refuse to live in the narrative that sexual pleasure is for men and that women exist to deliver that pleasure. Nobody will say that he was at fault for enjoying sex with me, but you can be damned sure that the men enacting these laws think less of me for deriving the same pleasure from him.”