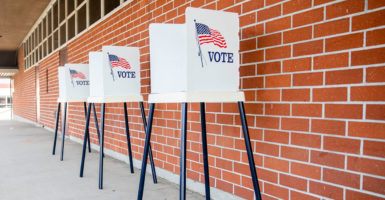 It has been a tough time for the city of Canton, Mississippi.

In the span of just a few days, two city leaders—including one running to be a judge—were convicted on charges stemming from a far-reaching voter fraud scandal that has ensnared numerous members of the city’s political establishment.

So far, seven people—five of them current and former public officials—have been arrested on sundry charges of bribery and intimidation, illegal voting, and unlawful “assistance” with absentee ballots. Six have now been convicted; the seventh is awaiting trial.

To borrow a phrase, there’s something rotten in the city of Canton.

Whenever voter fraud occurs, it undermines public confidence in elections and damages the integrity of the democratic process. And as the 13,000 residents of the town known as the “Hollywood of Mississippi” are finding out, that is especially true when the perpetrators are also public officials entrusted with political power.

The drama unfolding in Canton began in 2017, when a number of town officials attempted to illegally influence the outcome of a municipal election. In December, a grand jury handed down numerous indictments against city leaders and residents.

Charges against several individuals were subsequently dropped, but prosecutors pressed forward with the majority of cases.

Last week, Alderman Andrew Grant pleaded guilty to conspiracy to commit voter fraud and resigned his office. He was given a suspended five-year prison sentence.

Courtney Rainey, school board member, city director of human and cultural needs, and—if you can believe the irony—judicial candidate, faced two criminal trials in the span of a week. She was charged with illegal voting, conspiracy, and voter bribery and intimidation.

Rainey was accused of buying the votes of city residents using cash and, in one case, a Walmart gift card, and then attempting to intimidate one of those voters to stymie the criminal case brewing against her.

Rainey was convicted of witness intimidation, but a jury acquitted her of conspiracy to commit voter fraud. The jury could not reach a verdict on the voter fraud charge, resulting in a hung jury, which means another trial is likely in her future.

A former fire chief, Cary Johnson, also engaged in vote-buying, offering voters cash and beer. He was entered into a one-year diversion program that will allow him to avoid a felony conviction if he successfully completes the program.

A woman named Jennifer Robinson will also have the chance to avoid conviction if she successfully completes a one-year diversion program. She and Donnell Robinson each faced charges of voter fraud and illegal voting.

Donnell Robinson registered and voted despite being disqualified due to multiple prior criminal convictions. Jennifer Robinson voted in a ward in which she no longer lived. Donnell Robinson pleaded guilty to a misdemeanor and was given a suspended one-year county jail sentence and placed on probation.

Valerie Smith, a former Canton city clerk, faced 15 felony counts of falsely claiming that a voter had sworn a voter registration in her presence. She pleaded guilty to a charge that she violated voter registration statutes, and was ordered to pay a fine and was given a year of probation.

That’s quite the tally, and the prosecutions aren’t over yet. Vicki McNeil, another Canton alderman and the former police chief, is awaiting trial on multiple voter fraud charges.

The scandal in Canton is egregious, but it is far from the only time that politicians have given in to the temptation to try to rig electoral outcomes to ensure that the will of voters can’t impede their personal ambitions.

Earlier this year, the mayor of Gordon, Alabama, was convicted of voter fraud and removed from office. The North Carolina 9th Congressional District is in the midst of a special election after mass absentee ballot fraud tainted the 2018 congressional race.

And The Heritage Foundation’s Election Fraud Database, which today has 1,216 proven instances of fraud from nearly every state, contains many similar cases.

Elections are the pathway to political power in America. The sad truth is, there will always be individuals willing to exploit electoral vulnerabilities to advance their careers or further their causes.

That is why it is imperative, first, to acknowledge that voter fraud is real and can have profound consequences, and second, to embrace commonsense election integrity measures.

It is incumbent upon election officials to secure the vote by implementing policies like photo identification requirements, cleaning up voter rolls that are riddled with inaccuracies, and strengthening protections for absentee voting, which is particularly vulnerable to fraud.

Prosecutors, too, have a role to play. Suspected cases of voter fraud must be investigated and, when the evidence warrants it, fraudsters must be prosecuted. Allowing them to get away with electoral misconduct, or worse, not even bothering to investigate suspicious circumstances, only invites future electoral criminal activity.

That is the silver lining in this case. Canton voters could be forgiven if they feel a bit shell-shocked. A seemingly unending list of criminal cases against city leaders for abusing their positions and bribing their way to power can have that effect on voters.

But they should also take comfort knowing that the people responsible are facing justice, that their plots have been exposed, and that a clear signal has been sent that the community won’t abide politicians who cheat to win.